The Biden Administration and Higher Ed: Predictions for the Future 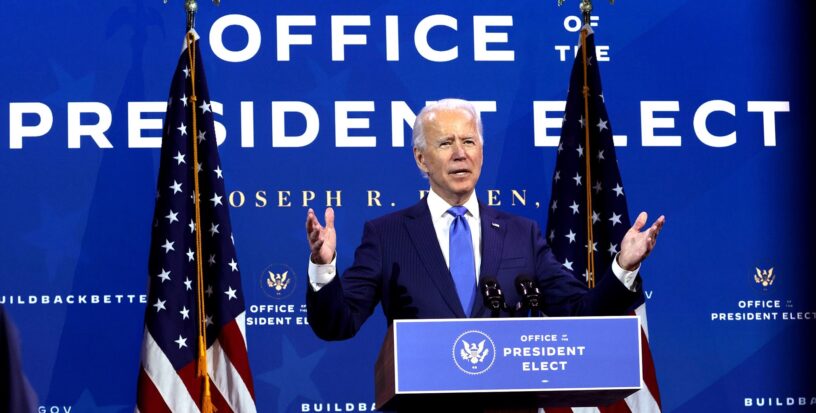 A few years ago, just before inauguration day, I shared “The Trump Administration and Higher Ed: Predictions for the Future.”

I noted the well-known saw that, when running for office, it is common to “campaign in poetry and govern in prose.”

In other words, it’s no surprise when politicians at every level, and from every party, offer ideas or even promises about goals, policies, and budgets during the run-up to an election that evolve into something very different once they are in office. That’s how our particular brand of democracy works.

Four years ago, though, anyone trying to predict the future decisions of President Trump faced a more challenging set of circumstances than usual.  As a presidential candidate, Donald Trump succeeded by abandoning conventional wisdom, along with major planks in his own party’s platform.  Clear, consistent statements about policy matters were few and far between, and higher education got very little attention from the then-president-elect during his campaign for office.

Generally speaking, the biggest impacts of the Trump administration on higher education over the past few years ended up involving relaxing, reducing, or outright eliminating various regulations:

Gone was the heavy scrutiny of for-profit institutions during the Obama administration that led to the closing of Corinthian Colleges, ITT, and others due to predatory practices.

Drastically reduced was the 265-page “Handbook for Campus Safety and Security Reporting” used by colleges like NECC to follow the requirements of the Jeanne Clery Act of 1990, meant to protect the safety of students on campus and in surrounding communities, and in its place was a 13-page addendum to another department handbook on administering financial aid.

Shifted was the load of colleges under Title IX regulations for monitoring, reporting, and prosecuting sexual assault on or near campuses, with judicial proceedings required, once again, to “balance the scales of justice” for accusers and the accused.

And, of course, the Trump administration spent most of the last four years unsuccessfully attempting to eliminate protections for “Dreamers,” undocumented immigrants brought to America as children who are now college students seeking to make their way in the only country most of them have ever known.

So, now that we (for the most part) know that Joe Biden will be sworn in on January 20, 2021 as the 46th president of the United States, what might we expect from the Biden-Harris administration over the next four years?

Well, keeping in mind that adage about “campaigning in poetry and governing in prose,” and recognizing the formidable challenges that a politically divided Congress will present, President-Elect Biden has been much more specific about “The Biden Plan for Education Beyond High School” and his ambition to “strengthen college as a reliable pathway to the middle class.”

From his own policy statements and other sources, here are some key areas that will likely get some attention in the months and years ahead:

Proposals for some kind of “free college” have been swirling around for years now.  The closest we have come so far are the various “college promise” programs being offered by a handful of states, or sometimes funded through private philanthropy.

For example, NECC launched the “Lawrence Promise” program nearly two years ago with the creation of a $1 million endowment from grants and donations, and is working on a second endowment for a “Haverhill Promise” program.  Each of these provides full scholarships for dozens of Early College students each year.

Biden’s version of “free college” would provide “two years of community college or other high-quality training program without debt for any hard-working individual looking to learn and improve their skills to keep up with the changing nature of work.”  The federal government would cover 75% of the cost, and states would be expected to pick up the remaining 25%.

The biggest challenge of any “free college” program, however, is an obvious one:  There is no such thing as “free.”  Somebody, somewhere has to pay the cost of educating college students, and unfortunately, over the past three decades, state support for higher education has trended in one direction: downward.  Consequently, states have become unreliable partners in “free college” efforts.

Even states like New York, New Jersey, Maryland, and Oregon that launched large-scale promise programs providing free, or substantially reduced, college degrees have had to face the economic realities of the COVID-19 pandemic and devastating recession of 2020 and reduce or eliminate their programs.

As much as college leaders want to make degrees much more affordable for students, after years of being bludgeoned by climbing costs and reduced support, they are understandably wary of “free college” proposals that might create expectations for students and families, and perhaps provide a year or two of funding, before retreating and leaving already under-resourced institutions responsible for the bills.

A wiser, and perhaps more politically accomplishable move is Biden’s intention to double the Pell Grant.  When they were created in 1972, Pell Grants covered nearly 80% of the cost of attending a public, four-year university.  Today, a student receiving the maximum $6,345 a year grant is covering less than a third of their expenses, driving up the enormous burden of student loan debt across the country.

Doubling the Pell Grant would positively impact the students who need financial assistance the most, in effect making at least the tuition portion of a college education “free” to them.

Supporters of cancelling student loan debt argue that a college degree is necessary for most middle class jobs; the cost of college has soared impossibly high; public support that used to subsidize the cost of attendance (back when most college students were white and middle class) has plummeted; cancelling student loan debt would be a form of racial justice, as students of color with fewer family resources tend to take out larger loans; and cancelling debt would provide a huge boost to the economy, as graduates struggling to pay off their loans have delayed marrying, moving, buying houses, and other milestones of adult financial independence.

Opponents of student loan debt forgiveness note that the largest debts are held by students who attended graduate schools and are profitably employed as lawyers, doctors, and other professionals; cancelling debts would be unfair to those who attended college and did not take out loans, or who have repaid them already, and would be enormously unfair to those who have not attended college at all, or have no college degree (which is still most Americans); and in the end, the stimulus to the economy would not be as dramatic as supporters predict it will be.

For all the pulling of hair and gnashing of teeth over whether to forgive student loan debt, how, and how much, if any steps at all are taken in that direction, they are likely to be more modest than student loan borrowers might like, and than debt forgiveness detractors are worried about.

The likeliest scenario right now is that low income borrowers might see $10,000 reductions in their debt due to COVID-19; and those participating in the Public Service Loan Forgiveness program (because they are employed by the government or a non-profit organization) may have expanded options for loan forgiveness.

Facing a longer, more uphill battle in a divided Congress is the prospect of complete debt forgiveness for borrowers who earn less than $125,000 per year annually—a policy position advocated by Bernie Sanders and the more progressive members of the Democratic Party.

The Deferred Action for Childhood Arrivals, or DACA, program was created in 2012 by President Obama, for whom President-Elect Biden served as Vice President, as a way of permitting people who were brought to the United States as children (referred to as “Dreamers”) and who now have an undocumented, and therefore unlawful, presence here to receive a renewable two-year period of “deferred action” from deportation and become eligible to attend college and seek a work permit.

The Trump administration, while claiming to want to find a way to protect Dreamers, tried persistently since 2017 to end the DACA program and reinstate deportations.

President-Elect Biden has pledged to fully reinstate DACA, signing an executive order that would take effect immediately after his oath of office on January 20, 2021.  Biden has also pledged to repeal the travel ban targeting individuals from Muslim-majority countries, and in several specific ways, reverse Trump-era policies and make American colleges and universities, which have seen four straight years of declining enrollments among international students, welcoming to the world once again.

Still, Dreamers receiving DACA protections cannot rest easy until American federal policy moves beyond dueling executive orders and into Congressional action.  Some kind of comprehensive immigration reform, including the ultimate fate of Dreamers, which both parties have called desirable, should be a priority in 2021.

Increased Support for HBCU’s and MSI’s

Northern Essex Community College was New England’s first federally designated Hispanic Serving Institution, and with a student body that is now more than 50% students of color, financial and policy support for the “unique and vital role” we play in our communities is extremely important to us.

So, it is encouraging to hear about potential plans for federal investment in capital financing programs that would expand broadband internet access, modernize classrooms and laboratories, and make HBCU’s and MSI’s more affordable for students.

This is actually an area of federal bipartisan interest, so traction on some of these issues is possible.  The outgoing Trump administration points to its support for the FUTURE Act and simplification of the FAFSA federal student aid process as steps in the right direction for HBCU’s and MSI’s, and indeed they may provide a toehold to climb from for joint negotiations during the Biden administration.

The very first goal in the “Biden Plan for Education Beyond High School” is to “Invest in community colleges and training to improve student success and grow a stronger, more prosperous, and more inclusive middle class.”

This is no coincidence.  When Dr. Jill Biden moves back into the White House as First Lady, she plans to continue her day job teaching English Composition to students at Northern Virginia Community College.

Recognizing that half of all Americans with a bachelor’s degree attended a community college at some point along the way, Biden’s plan notes that, “Part of what makes community colleges so extraordinary is that, working with limited resources, they have figured out how to provide a high-quality, cost-effective education to students often juggling additional responsibilities, such as jobs or child care. But as a country, we haven’t invested enough in making sure community colleges can reach all the Americans who could benefit from their programs, or improve their quality and completion rates.”

The majority of community college funding comes from student tuition and state support, with some colleges also relying on local taxes from host cities or counties, so the federal government’s role in building the base budgets for institutions like NECC is likely to be limited.

However, there is a lot the federal government can do through grant programs like Perkins, WIOA, Strengthening Institutions, TRIO, and targeted funding for HBCU’s and MSI’s to ensure expanded, and more reliable, resources for workforce training, student support services, and critical technology, equipment, and infrastructure.

Clearly, at least the first few months of the Biden administration will have to be focused on ending the COVID-19 pandemic and restoring a once vibrant, now wrecked and reeling, economy.

But as then-candidate Joe Biden insisted in October during the final presidential debate, when asked about his response to reopening schools and businesses shuttered by COVID-19, “We ought to be able to walk and chew gum at the same time.”

The health and safety of our nation is our top priority—and its economic wellbeing, education, workforce preparation, and long overdue need for investing in the tools that will provide greater social equity are right there at the top of the list, too.

In 37 days, it will be time to put on those walking shoes, pop in a stick of Trident, and get to work.