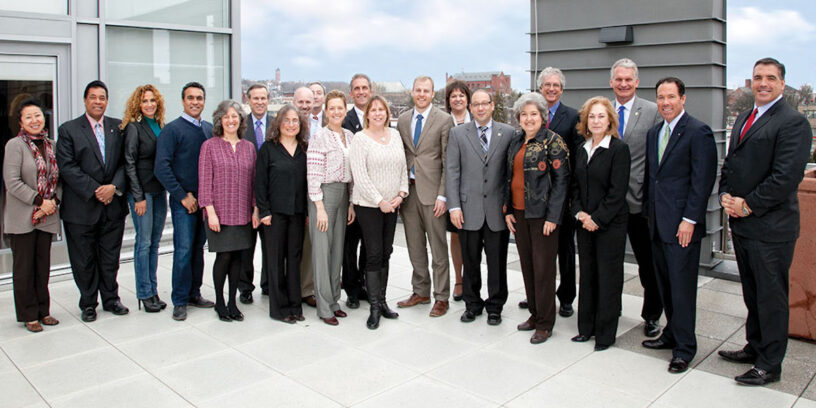 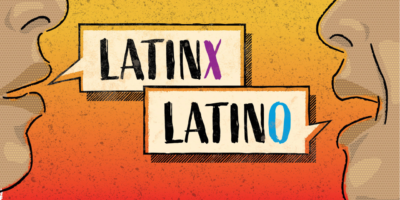 This morning, the Boston Foundation announced that Northern Essex Community College has been awarded the 2021 Deval Patrick Prize for Community Colleges for NECC’s role in creating and supporting the Lawrence Partnership, an innovative private-public partnership of business and community leaders dedicated to economic development and improving the quality of life in the “Immigrant City” of Lawrence, Massachusetts.

The award comes with a $50,000 prize and, just as importantly, statewide recognition that we hope will encourage similar municipal and regional economic development partnerships across the Commonwealth.

Working alongside the caring and amazingly talented leaders of the Partnership, all wholly devoted to the City of Lawrence, has been a tremendously fulfilling experience; and this award from the Boston Foundation offers a moment in time to reflect on just how far we have come together.

In 2012, Boston magazine ran an article with the unflattering, sensationalist headline, “Lawrence, MA: City of the Damned.”  The first sentence summed up the rest of the story: “Crime is soaring, schools are failing, government has lost control, and Lawrence, the most godforsaken place in Massachusetts, has never been in worse shape.”

While Lawrence certainly had problems in 2012, and continues to have its share of challenges today, a group of business and community leaders representing the city’s financial institutions, healthcare organizations, schools and colleges, manufacturers, property developers, and others knew there was much more to the story.

They had studied the findings of the Federal Reserve Bank of Boston, including their research on “Lessons from Resurgent Cities,” and they knew that, with the right combination of three things: Ideas, Investment and Action (the tagline of the Lawrence Partnership), Lawrence could be one of those successful resurgent cities.

Today, less than ten years later, the New York Times, the Wall Street Journal, the Christian Science Monitor, and other national publications are holding Lawrence up as a model of civic engagement, educational reform, transportation innovation, and more.

While Northern Essex Community College has played a leadership role from the beginning, and continues to be the “incubator” for the Lawrence Partnership, providing space, staffing, technology, and financial support, this community collaboration works so well because everyone involved contributes, leaders take turns leading and supporting, and our collective vision for the future of Lawrence transcends the needs and goals of any one person or organization.

With a mantra of “inclusive economic development,” the Lawrence Partnership operates with a number of Guiding Principles, including the understanding that, “Each sector—public, private, non-profit—is uniquely qualified and positioned to assume a leadership role in different circumstances, but overall, the greatest impact results from all three working in concert.”

While we maintain a board membership that is more than half representative of the private sector, as the list of “Our Partners” indicates, the Lawrence Partnership is a “big tent” collaboration of business leaders (e.g., banks, manufacturers, healthcare organizations, property developers, insurance companies); city and state elected officials; government agencies; workforce development partners like the Merrimack Valley Workforce Investment Board and MassHire Career Center; the Lawrence Public Schools and many other organizations.

Collectively, these organizations shape the goals and initiatives of the Partnership through annual strategic planning processes, bi-monthly board meetings, networking events, frequent email communication, and an annual meeting that, pre-COVID, regularly attracted hundreds of participants from Lawrence and from other communities and organizations invested in the economic development of Massachusetts Gateway Cities.

While the Partnership regularly conducts planning activities and works toward established goals, one of its strengths is also its adaptability, and some of our greatest successes so far have been through responses to unexpected crises or opportunities, thanks to the strong relationships formed by our civic engagement model.  Some examples include:

The “Why Lawrence?” Campaign

While Boston Magazine’s “City of the Damned” article was a catalyst for the creation of the Partnership, it was not the only negative story being told outside the city, mostly by people and media organizations that did not know the city well, and were not taking the time to understand us.

To tell our own story more accurately and effectively, we launched the “Why Lawrence?” campaign, a multimedia strategy that included a series of short videos, paid for by member organizations and highlighting the city’s most important assets: its people.  The videos featured small business entrepreneurs, immigrant healthcare workers, educators, bankers, and more, and were distributed via the Partnership’s web site and social media channels throughout our network.  We also coordinated the release of the videos with targeted op-ed pieces in local and regional newspapers and magazines.

Like any city our size, with the challenges we face, negative stories still appear from time to time; but they are now countered by a steady stream of stories explaining the tremendous progress the city is making, including a March 2020 feature in the New York Times with the encouraging headline: “One City’s Road to Recovery Offers Lessons, and Hope.”

Recognizing that persistently high unemployment was one of the greatest challenges to economic recovery in Lawrence, the Partnership formed a Training Consortium in 2016 that surveyed the city’s employers to determine the greatest current and future workforce needs.

As a result of employer feedback, the Training Consortium:

Lawrence is an entrepreneurial community with a disproportionately high number of small and micro businesses.  While these businesses serve as the lifeblood of our local economy and are vital investors in local supply chains and employees, many have a hard time accessing traditional financing to start and grow.  Through innovation and collaboration, though, the Lawrence Venture Loan Fund fills this gap, helping to build wealth locally and contributing to the virtuous cycle of commerce.

The Fund is capitalized by 11 Partnership-member financial institutions committing $100,000 each to create a $1.1 Million fund available for local lending. The City of Lawrence and Essex County Community foundation support with loan loss reserves to further off-set the risk of the loans.   The Partnership administers the loans and the program in close partnership with community development financial institution, Mill Cities Community Investments, who has both cultural competency and expertise working with small business.

This collaboration among the Partnership, Northern Essex Community College, and Lupoli Companies originally launched on NECC’s downtown Lawrence campus in 2016 as a “pop-up restaurant” opportunity for aspiring food entrepreneurs. The first entrepreneur to occupy the RTK, Coco Ray’s, was a tremendous success and now operates a stand-alone restaurant and food truck in the city.

In 2021, with the help of a $600K grant from the U.S. Economic Development Administration, secured with the assistance of the Merrimack Valley Planning Commission and U.S. Representative Lori Trahan, the RTK has been re-opened as a shared culinary workspace in Lawrence, complete with multiple prep and cook spaces and dry and cold storage. It is a complete shared kitchen, as well as a springboard for aspiring, local food service entrepreneurs to launch their dreams with the support of experts in food and business from the Foundation Kitchen.

Founded in 2018, the Lawrence LEADS program was a pilot initiative incubated by the Lawrence Partnership, in collaboration Boston leaders Jesse Mermell, Jeff Bussgang, Pam Hallagan and others connected with the Alliance for Business Leadership and the Harvard Business School.

The program invests in a cohort of area leaders as a key strategy of investment in the City of Lawrence, building both the capacity of individual leaders as well as the connectivity among them and their ability to work together for the broader good.

LEADS combines the academic rigor of a Harvard Business School course with experiential learning opportunities in Lawrence and Boston, helping participants develop skills to better position their businesses and organizations for growth, while also building their capacity and commitment as civic leaders. Through its success, the LEADS program has now scaled regionally, with programming in Lowell and Haverhill, with other Massachusetts Gateway Cities planned in the future.

For decades, the City of Lawrence has suffered the challenges of an outdated, outgrown, and dilapidated old police station, limiting the ability of residents to effectively interact with police, as well as the effectiveness of law enforcement in the city.  In 2014, NECC President Lane Glenn (then Chair of the Partnership), State Senator Barry Finegold, and former Mayor of Lawrence Dan Rivera, with the support of the Partnership’s Board of Directors, organized an effort to build a new police station and launch a police academy for the Merrimack Valley.

NECC started the Merrimack Valley Police Academy in 2015 and it has since become one of the largest academies in the state, producing hundreds of police officers for cities and towns across the Commonwealth.  And, after years of planning and advocacy, last year Governor Baker announced that the state would be providing $49M in funding, matched by an additional $10M from the city, to construct a new, state-of-the-art police station by 2023.

On September 13, 2018, the cities of Lawrence, Andover, and North Andover in the Merrimack Valley were rocked by explosions as Columbia Gas residential and commercial pipelines burst, setting more than 80 fires across the region.  One person was killed, and thousands were displaced by mandatory evacuations that lasted for weeks, then had to struggle with no heat and the slow process of restoring damaged utilities and appliances as winter began.

Members of the Partnership were on the front lines of the response to the Columbia Gas disaster from the beginning, setting up shelters, providing food and other assistance to displaced residents, organizing fundraising efforts, providing support to small businesses, and eventually, along with the Essex County Community Foundation, managing millions of dollars in relief funds provided through a settlement with the gas company.

Until the gas settlement relief funds were available, the Partnership raised over $3M in low-interest emergency loans from 21 banks to help small businesses closed by the disaster survive and eventually reopen again.

Speaking at the Partnership’s annual meeting in 2019 and reflecting on this challenging moment in the city’s history, Aixa Beauchamp, Managing Director at Beauchamp & Associates and Co-Founder of the Latino Legacy Fund at the Boston Foundation, said, “You showed us how we could shape a new narrative in this city and for Latinos in the Commonwealth. You showed us the power of working with others instead of working over others. You didn’t limit your leadership to one charismatic person or one powerful organization. You shared the leadership among many.”

Early in the pandemic, when infections in Lawrence were consistently among the highest in the state, members of the Lawrence Partnership, along with staff from the hospital and city officials, started a COVID-19 Task Force which initially sought to encourage safe practices in the community, such as testing, mask wearing, social distancing, and limiting group gatherings.  Then, when vaccines became available, the Task Force turned its attention to overcoming vaccine hesitancy in our largely Hispanic and immigrant community, and eventually to helping facilitate vaccine clinics across the city.

Working Together is Success

When the members of what would become the Lawrence Partnership first came together in 2012-2013, we knew that was only the beginning of a decades-long commitment to improving the economy and the lives of Lawrencians.

Each year afterward, as we have stayed together, our annual meetings have grown in size and spirit, and our impact reports describe the progress we are making.

Most importantly, as this week’s award from the Boston Foundation recognizes, seven years after our founding, the Lawrence Partnership remains devoted to working together for the success of this City we all love.