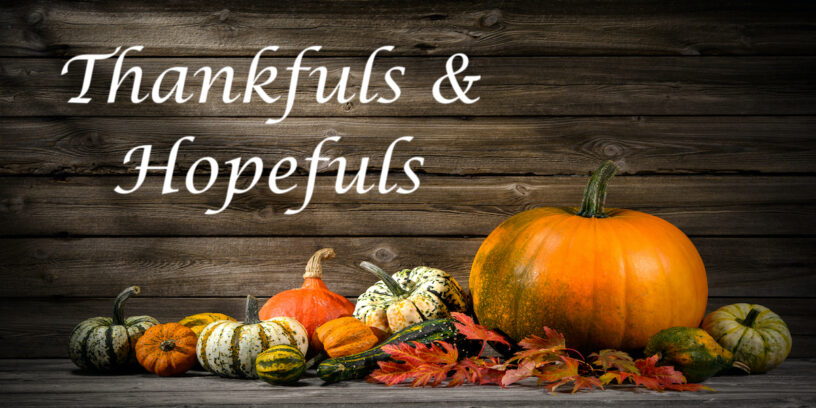 For many years now, there has been a dinnertime tradition at my house.  As we sit down to enjoy each other’s company and the evening meal, we share something we are thankful for and something we are hopeful for.

There aren’t too many rules about what we call our “Thankfuls and Hopefuls.”  We used to say them first and try to keep the lists short enough that the food wouldn’t get cold, but as my daughters grew older, and the “Thankfuls and Hopefuls” became even more involved and interesting, we finally decided to go ahead and eat while we share (and do what we can not to speak with our mouths full).

As idyllic and Norman Rockwell-ish as this tradition of ours may sound, it actually began during a time of hardship in our family, when seeking out things to be thankful for and dreams of the future to aspire toward helped us get through the many challenges of the day.

The past year has continued to deal us all its share of challenges, though more light seems to be on the horizon.  As Thanksgiving approaches, and we all prepare to sit down and enjoy the company of those closest to us over a good meal together, sharing a sense of gratitude and hopefulness may be just what we all need most.

Here are a few things from 2021 that I’m Thankful for:

At a time when most colleges in Massachusetts and around the country continued to experience enrollment declines as a result of demographic changes, the pandemic, and the economy, NECC managed to start the fall 2021 semester with a slight enrollment increase, mostly thanks to more new students joining us for classes this year.

As New England’s first Hispanic-Serving Institution, with a population that is mostly students of color, we knew we needed to act quickly, and took several steps to turn around this troubling trend, including:

And a whole lot more.  Welcome to all of our new and returning NECC students—we are glad you are here!

What a difference a year makes.

During Thanksgiving 2020, if we gathered together at all it was masked, possibly outdoors (brrr!), and in small “pods” of people who lived in the same house, with maybe another cautious, trusted pod from nearby, around a smaller bird and fewer fixings than usual.

A few days ago, Massachusetts Governor Charlie Baker encouraged state residents to enjoy Thanksgiving with their families as usual this year, because nearly five million people in the Commonwealth are vaccinated against COVID-19, one of the highest rates in the nation, according to the Centers for Disease Control and Prevention.

On the way to beating the University of Maine—Augusta 78-66 in their season opener, the NECC Knight’s men’s basketball team managed to achieve some national notoriety, thanks to the mullet sported by Matthew D’Amato, a Liberal Arts major and transfer student from Salem State University.

NECC Alum Andrew Comeau, who contributes to the @ballislife social media accounts, posted some pictures and a video of Matt’s Mullet which quickly went viral.  ESPN’s SportsCenter picked it up and shared with their 26.37 million Instagram followers, dubbing D’Amato the “Mullet Mamba.”

We’re planning to keep the fun going all season long.  At last night’s home game against Great Bay Community College, the first 25 fans were given their very own mullets to wear while cheering on the team.

Return of Live Theatre to NECC

After nearly two years without a live audience, NECC Theatre returned to the stage with an outdoor production of Tiny Beautiful Things November 4-7 on the lawn outside of the Harold Bentley Library on the Haverhill campus.

Directed by Brianne Beatrice, a well-known local performer who has taught and directed at NECC for several years, and was recently appointed as the college’s new Assistant Professor of Communication/Theater, Tiny Beautiful Things featured a cast of four, including Gwynnethe Glickman, a liberal arts major from Newbury, and a two-time Kennedy Center award winner, in the lead role of Sugar, an online advice columnist.

The roots of live theatre run deep, and for most of its history, from ancient Greek performers at the Theatre of Dionysus in Athens; to medieval morality players and the clowns of the Italian Renaissance commedia dell’arte trouping around the countryside in horse-drawn wagons; to the works of William Shakespeare, performed in the “great wooden ‘O’” of the Globe Playhouse on the banks of the Thames in London, performances have been outdoors.

Some of the greatest works of English dramatic literature have even emerged from pandemics:  Shakespeare is said to have written plays like Macbeth and King Lear while theatres were temporarily closed in 1606 because of the bubonic plague.

Bravo! to Professor Beatrice and the cast of Tiny Beautiful Things for reconnecting us to the roots of live theatre, and for a wonderfully moving performance.

A Trio of NECC Anniversaries

This fall marks a trio of important NECC anniversaries:

And here are a few things I am Hopeful for:

As wonderful as it was to greet nearly 5,000 students on campus this fall, including that increase in new student enrollment, our new challenge—for each and every faculty and staff member at NECC—is to hold on to them, to help them through the first few critical weeks of the fall semester, to connect them with the academic supports and financial assistance they may need, and to do everything we can to ensure they complete their fall courses, enroll again in January, and accomplish their academic goals.

When we do, we accomplish NECC’s Equity Imperative: We close every gap in student success among our male and female students, our students from different economic backgrounds, and especially among our Latino and White students, and everyone succeeds.

Yes, we have COVID-19 vaccines this year, and yes, Massachusetts and most of New England are among the most vaccinated places in America—and we are still a long way from full inoculation and ending the pandemic.

We are doing our part at NECC.  All fifteen of the state’s community colleges are requiring all employees and students taking classes on campus to be vaccinated by January.

If you or someone you know still needs the COVID-19 inoculation, NECC is hosting two mobile vaccination clinics on our Haverhill and Lawrence campuses next week:

“Out of many, one”: The motto of the United States of America since 1776, and a recognition that our highest aspiration has always been to become greater than the sum of our separate parts.

Differences of opinion have driven us since our founding, and have caused us to grow stronger; and although we have lived through perilous times, such as a bloody civil war, when our differences may have never seemed greater, today’s rancor and ideological divides have our democracy pushed quite close to the edge.

It’s time to restore some “unum” to the “pluribus.”

In 1961, the year that Northern Essex Community College enrolled our first students in classrooms at the Greenleaf Elementary School in Haverhill, our state’s own President John F. Kennedy addressed the Canadian Parliament in Ottawa, reassuring them that, “Geography has made us neighbors. History has made us friends. Economics has made us partners. And necessity has made us allies. Those whom nature hath so joined together, let no man put asunder. What unites us is far greater than what divides us.”

While his address was meant to unify friendly international neighbors, the same can be said for neighbors right here in America, down the street or in the “red” or “blue” state next door.

What unites us is far greater than what divides us.

Kennedy went on to sound a note of realism amidst idealism: “We are bound to have differences and disappointments,” he acknowledged, “And we are equally bound to bring them out into the open, to settle them where they can be settled, and to respect each other’s views when they cannot be settled.”

Diversity of thought and opinion, competition, and even conflict can drive discovery, innovation, and fruitful compromise.

But to get there, we need to restore dignity, decorum, and goodwill to our public discourse.

I am hopeful we find a way to do this in the months ahead.

It’s a big year for the Glenn girls, and the Dad in me, which is a big part of me, is thankful that Thomasina (a.k.a. “Big Sis T”) has graduated with a degree in Music Business and Industry, moved to New York City to spend much of the year recording a new album, and has returned to Boston to live in the North End (closer to home) while she promotes it around the world; and hopeful that her collection of original songs I Wrote it All Down, will be another step toward her dream of life as a professional musician coming true.

I’m also thankful that Zoë (a.k.a. “Little Sis Z”) is having a relatively normal senior year of high school, with friends and football games, as well as college classes, internships, and her first experience on an election campaign; and I’m hopeful that the applications she has completed land her at her dream college in 2022.

Finally, I am hopeful for a peaceful, restful, healthy, and enjoyable Thanksgiving holiday for you and yours.  As you sit down to dinner and enjoy the company of those closest to you, may you truly give thanks for the good things in your life, and let the spirit of hope lift you up and inspire you and those around you.