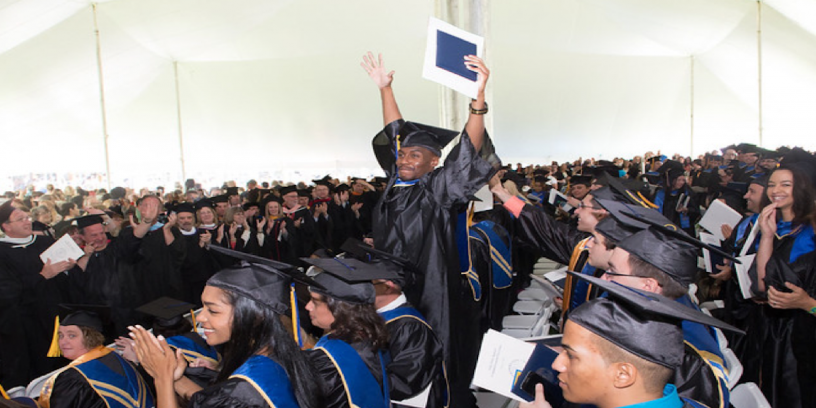 NOTE: This article was prepared from a presentation provided to the faculty, staff, and trustees of Northern Essex Community College during our Fall 2019 Convocation.

At one time or another over the past few years, you have probably heard some version of this question asked:  Is college worth it?

Some mainstream media outlets, reaching for sensational headlines, have even pushed a bit further:

Very often, the skeptics behind the headlines are questioning over-the-top campus luxuries like robots delivering food to students in their dorm rooms at George Mason University, or lazy river water parks, climbing walls, and meditation roomsat places like the Universities of Alabama, Wyoming, and North Dakota; or the gourmet food at places like the University of Massachusetts at Amherst, which the Princeton Review has proclaimed the “Best Campus Food” for four years in a row.

Or, they are questioning the soaring tuition costs (topping $70K a year at some schools); questionable course offerings, like “Tree Climbing” at Cornell, or “What if Harry Potter is Real?” at Applachian State University; poor graduation rates, high student loan debt, and sometimes meagre job prospects at the end of the line.

So, what’s the verdict?  Is college worth it?

Well, when you consider that college graduates:

Then the answer would seem to be a resounding “YES, college is worth it!”

That is, IF you graduate.

Trouble is, not enough students do.

According to the National Student Clearinghouse Research Center, just 58 percent of students who started college in the fall of 2012 had earned any degree six years later.

That’s counting millions of Americans, two- and four-year schools, public and private. Out of everyone who started toward a degree, just over half are making it.

As you might guess, those outcomes vary widely by race and ethnicity, with Asian students most likely to complete a degree, followed by their white counterparts, then trailed, very distantly, by Hispanic and black students.

Hispanic student success has been particularly important to Northern Essex Community College for quite some time.  We have the largest proportion of Hispanic students—more than 40%–of any college or university in Massachusetts, and we were New England’s first federally designated Hispanic Serving Institution, back in 2001.

First, some good news:  Even though only 58% of entering college students in America are completing degrees, graduation rates are actually up across the board, for all categories of students and all sectors of higher education.  We are improving.

And we’re getting better at providing access to college for Hispanic students.  According to the U.S. Department of Education, between 2000-2015, the college-going rate among Hispanic high school graduates grew from 52 to 67 percent (nearly comparable to the white rate of 70 percent).

During that time, Hispanic undergraduate enrollment more than doubled, to 3 million; and more than a quarter of young Hispanics — 28 percent — now have at least an associate degree, up from 15 percent in 2000.

There is some good news here in the Bay State, too.

We know that we lead the nation as the “Education State.”  According to the Massachusetts Department of Higher Education, we are at the top for high school graduation, college enrollment, and overall college attainment rates, giving us the best-educated citizenry in America.

And, according to the Education Trust’s 2018 State of Higher Education Equity report, Massachusetts ranks 10thin the nation for Latino degree attainment.

And there is good news at Northern Essex Community College.

We are seeing the effects of this population shift in our student body, where the fastest growing demographic is Hispanic female students, followed by Hispanic male students. These two groups together are now more than 45% of all of our students.

Beyond just providing access to more Hispanic students, we are also seeing some improvement with their success.

In other words,Latino Americans, the largest and the fastest growing ethnic minority in the United States, are half as likely to hold a college degree as non-Hispanic white adults.

And as proud as the Commonwealth may be about our overall graduation and educational attainment rates, we should take no pride at all that:

The situation is so severe that the state’s Board of Higher Education, recognizing the need to light a fire underneath all of us, declared their recently adopted “Equity Strategic Framework” the most important single statewide goal for higher education in the Commonwealth.

And, just as there is bad news at the national and state levels when it comes to equity in outcomes, so, too, does NECC have its share of woes:

It is not hard to see why closing this gap completely is important not only to us at NECC, but to everyone across the state.

By 2032, nearly one out of every four students graduating from Massachusetts public high schools will be Latino.

Which brings us to the “Equity Imperative,” a challenge I presented to the faculty, staff, and members of the college’s board of trustees at our Fall 2019 Fall Convocation:

NECC is uniquely positioned to close the student success gap between Latino and white students and help prepare more citizens of Massachusetts for a prosperous future.

As our record shows (our Latino students are succeeding at higher rates than the state averages), we have been busy with new initiatives and shifting resources to where they seem to make the most difference.

More than 40% of our students are Latino, and while that includes students from Cuba, Honduras, Peru, Mexico, and many other countries, most are from the Dominican Republic.  The better we know our students—their backgrounds, culture, and expectations—the better we will be able to help them succeed.

For the past few years, Dr. Noemi Custodia-Lora, NECC’s Vice President of Lawrence Campus and Community Relations, has been leading groups of faculty and staff on weeklong visits to the Dominican Republic, where they tour the schools, hospitals, police stations, stores, and homes of residents in and around Santo Domingo, and out in the countryside.

NECC faculty and staff, led by Dr. Noemi Custodia-Lora, in the Dominican Republic.

As part of our LIFT: Leading Into the Future Togethermajor gifts campaign, we have been raising funds toward a $1 million endowment to provide full scholarships to Lawrence Early College graduates, providing them with the resources needed to stay in school and graduate with a degree.

And NECC was recently awarded the annual Deval Patrick Prize for Community Colleges by the Boston Foundation for our Programa Internacional de Educación Superior Latina de Northern Essex Community College (PIÉS Latinos de NECC); a program that validates the foreign educational credentials of immigrants and helps connect them to resources to complete degrees and get better paying jobs in the local workforce.

But we still have a long way to go to completely close the student success gap.

What Happens When We Close the Gap?

Well, at a time of declining enrollment overall and lean state resources:

But there is much more at stake than dollars and headcounts.

What is the greatest predictor of socioeconomic success in America?

The answer: Socioeconomic success in America.

Whether or not your family is already successful is becoming the greatest predictor about whether you will be successful.

In other words, your zip code.

Raj Chetty is a Harvard University economist who has been making quite a name for himself analyzing “big data” from the U.S. Census Bureau, the Internal Revenue Service, the Integrated Postsecondary Educational Data System (IPEDS), and other sources.

For example, he created an “Opportunity Atlas” that visually demonstrates socioeconomic mobility.

One of the distressing features of Chetty’s research is that, while children born in the ‘40s and ‘50s were almost guaranteed a better life than their parents, only about half of the kids born in the ‘80s can expect to do better socioeconomically—and we seem to be moving in the wrong direction.

Chetty, the same Harvard economist who created the “Opportunity Atlas” also helped create a database that shows how successful higher education institutions like ours are at social mobility.

For example, at NECC:

In fact, out of 76 colleges and universities in Massachusetts, NECC is 14th, and third among community colleges, at helping students pursue the American Dream, and find careers, incomes, and lives for themselves better than where they started.

And we can DO BETTER.

Because these benefits only apply to students who finish their degrees with us.

Back to that “Equity Imperative.”  When we close the student success gap between our Hispanic and Non-Hispanic students, we will achieve equity, and a measure of social justice, for all of the students and communities we serve.

Our students, their families, the communities they live in, and the entire Commonwealth of Massachusetts will benefit, because, yes, a college degree is worth it…when you graduate.