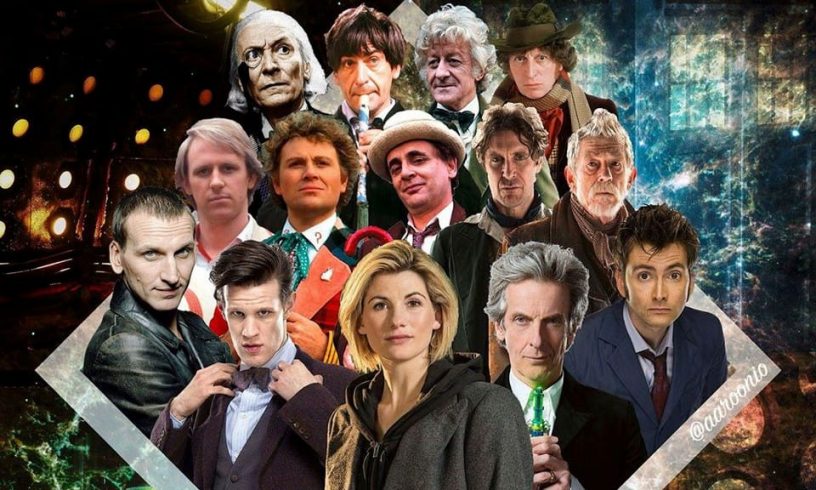 In the midst of all the cacophonous coverage this week of Supreme Court Justice hearings, Chinese spies, and Gulf Coast hurricanes, you may have missed one cheerily optimistic news story about a galactic glass ceiling being shattered: The new Dr. Who is a woman.

Well, technically, Dr. Who is neither a man nor a woman, but a rare, non-gendered, shapeshifting form of extraterrestrial being known as a Time Lord; but for more than half a century the lead character in this wildly popular science fiction franchise has been played by a parade of male actors—until now.

Last Sunday at 1:45 p.m. Eastern Standard Time, and simultaneously in countries and time zones all around the world, the British Broadcasting Corporation (BBC) premiered the newest season of Dr. Who featuring English actress Jodie Whittaker as the thirteenth incarnation of the Doctor.

In addition to expanding an already enormous global fan base and giving television reviewers and sci fi bloggers everywhere plenty to write about, the new Dr. Who also offers a safe and relatively easy opportunity, for those who may be interested, to try out a feature of English grammar that is gaining in popularity and usage on college campuses and elsewhere: gender neutral pronouns.

Gender neutral pronouns are not new; they have been around for hundreds of years, as noted in this Chicago Tribune article, or this blog post on the web site of the Oxford English Dictionary.  Today, even Forbes magazine offers advice in articles like “How to Respectfully Use Gender Pronouns In The Workplace.”

But for most of us, they are not something we use frequently, and how to use them, particularly when we are seeking not to offend, may seem daunting.

Long-time readers of this blog, and its previous incarnation, a weekly email newsletter, may remember that each story used to begin by describing what kind of week it had been at NECC, and usually included a tale about my daughters, known back then as “Big Sis T and Little Sis Z.”

This week, in honor of the first female Dr. Who and as a hopefully reassuring example of how to use gender neutral pronouns when they are appropriate, I am reposting a piece I originally shared in 2014, updated with these gender-neutral pronouns recommended by the Massachusetts Institute of Technology.

It’s been an Acronymic week at Northern Essex Community College…

You are dangling from the ledge of an antigravity platform, floating high over the planet Bellepheron.  Toclafane drones dart all around you like a swarm of mechanical bats, and far below, a giant, blue cloud of gas and debris is swirling faster and faster across the planet’s surface.

Lives hang in the balance.

A heavily armored Sontaran warrior (whose head looks strangely like a shriveled, baked potato) removes his helmet so he can look you straight in the eye with a menacing glare.  The fate of the known universe depends on your answer to his next question:

Tell me, honored foe, what do these three things have in common?

If you looked back up into his ornery, Russet-skinned face and told him that “Dalek” is a trendy new club in the North End where you can drink a “sonic screwdriver” and go all “wibbly-wobbly, timey-wimey,” then you are clearly not a “Whovian,” (like Big Sis T, Little Sis Z, and me) and the loud “Bang!” you just heard was the planet Bellepheron collapsing into a black hole.

The right answer, of course, is that they all come from the television program recognized by the Guinness Book of World Records as the longest-running science fiction show of all time:  Dr. Who.

The mysteriously unnamed Dr. Who is a “time lord,” the last of hir kind, following the destruction of hir home planet, Gallifrey, during a great battle against hir arch-nemeses, the Daleks. Ze travels through time and space, armed with nothing more than a sonic screwdriver, and usually with a human companion or two, solving mysteries and saving other planets (and occasionally the entire known universe) in a machine called the “TARDIS” (which stands for “Time and Relative Dimension in Space.”)

Ze is dazzlingly brilliant, but when pressed to explain how the TARDIS works, the best ze can come up with is that, “People assume that time is a strict progression of cause to affect, but actually, from a non-linear, non-subjective point of view, it is more like a big ball of wibbly wobbly, timey wimey…stuff.”

When the hit British Broadcasting Corporation (BBC) series debuted on November 23, 1963, it was originally intended for family audiences, as an educational program using time travel as a way of exploring scientific ideas and famous moments in history.  In the early years, the BBC would alternate episodes that took place in the past (to teach kids about history) with episodes that took place in the future or somewhere in outer space (to teach them about science).

Even now, more than 50 years later, there are still a fair amount of past, future, and outer space lessons to be learned (especially if you pair up watching episodes of Dr. Who with the recently re-launched Cosmos series), but mostly the show is an enormously fun romp through time and space—equal parts edge-of-your-seat suspense and eye-rolling camp.

And it plays pretty fast and loose with important things like, oh, physics and reality.  The TARDIS, for example, is a blue London Bobby call box that is much bigger on the inside than it is on the outside, and the Doctor’s sonic screwdriver, while mostly used to open locked doors, can in a pinch also hack computers, ignite swamp gas, and render a green, slobbery alien’s laser pistol useless.

When I was a kid, back in the 1970’s before every house had 500 channels patched in from all around the world, Dad and I waited eagerly for Saturday nights, when our local PBS station went British, and broadcast back-to-back episodes of Dr. Who(played back then by many fans’ favorite Doctor, Tom Baker) and Monty Python’s Flying Circus (Philosopher Football, anyone?)

After a run of more than 25 years, Dr. Who went off the air for a while back in 1989; but bounced back with an intergalactic vengeance in 2005, and now has a bigger fan base than ever—with an estimated 77 million viewers on six continents tuning in; including a growing number of young girls, like Big Sis T and Little Sis Z.

We started watching the new Dr. Whoseries on DVD a few months ago, and, after country music and soccer games, it has quickly become the most popular entertainment at our house.

So, how is it that after decades of space heroes whose adventures mostly appealed to rough-and-tumble adolescent boys (think Flash Gordon, Captain Kirk, and Luke Skywalker), dads and daughters around the world are now sitting down together with a bowl of popcorn to watch the exploits of a quirky Brit who travels through time dressed in Converse sneakers and a bow tie?

Well, here are just a few of the reasons Big Sis, Little Sis, and I are “Whovians” (fans of the show):

Most action heroes are muscle-bound supermen (even when they are women) who kick alien butts and, when that doesn’t work, blast them with ray guns, phasers, or light sabers.  When you look around at the mess after the day is saved, it’s sometimes hard to tell the good guys from the bad guys.

Dr. Who, on the other hand, never punches or shoots anybody.  Ze hates guns of any kind.  That sonic screwdriver ze carries around is the closest thing ze has to a weapon. Ze defeats entire armies of rampaging baddies like the Zygons, the Cybermen, and the Daleks with charm, wit, and an encyclopedic knowledge of every subject in the universe.  Far from being a lantern-jawed tough guy, the Doctor is basically a huge nerd.

The Sky’s (Not) the Limit

There is no limit—truly, no limit—to the storytelling possibilities of Dr. Who.  Other heroes and legends, no matter how dynamic or accomplished, are bound by geography or epoch.  The Lone Ranger galloped across Texas. Batman patrolled the nighttime streets of Gotham City. Even Captain Kirk grew paunchy and gray and handed over the keys to the Starship Enterprise.

But Dr. Who literally has all of time and spaceto choose from.  The TARDIS can show up anywhereand anywhen—and, thanks to the regenerating abilities of time lords, its captain lives forever (played by thirteen different actors over the last half century).  Some of Big Sis and Little Sis’ favorite episodes involve Pompeii and the eruption of Mount Vesuvius, William Shakespeare battling witches at the Globe Theatre, Charles Dickens’ first encounter with ghosts, and the destruction of the Earth by the expansion of the sun in the year “5.5/apple/26,” five billion years in the future.

You Can Make a Difference

Anthropologist Margaret Mead famously said, “Never doubt that a small group of thoughtful, committed citizens can change the world; indeed, it’s the only thing that ever has.”  Week after week, Dr. Whoproves Mead was right, as the good Doctor and a handful of hir thoughtful, committed companions defeat entire skies full of dastardly aliens.

Dr. Who could choose to have his adventures anywhere in time and space, yet ze mostly hangs out right here on good ol’ Planet Earth.  Why?  Ze is enthralled by—in love with, really—the very best qualities of human beings; and it is these qualities—intelligence, curiosity, kindness, and resiliency—that time and again win the day.

The Glass is Always Half Full

Even though ze is more than 900 years old, the Doctor has a bubbly, enthusiastic, even child-like way of seeing the universe.  For all the wars and destruction ze has seen, ze is the galaxy’s greatest optimist.

And if there is one thing Big Sis T, Little Sis Z, and I always love, it’s a happy ending.

As you look back on your week, and forward to the one ahead, may you share your talents generously, lobby for a good cause, and spread peace around the galaxy.