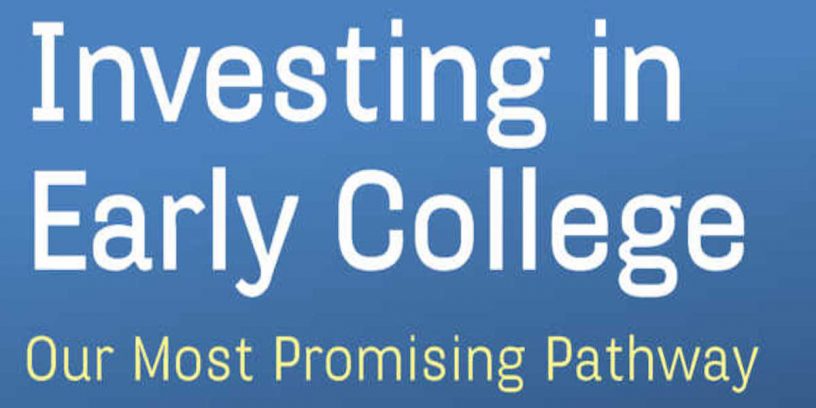 If you are a student or parent worrying about the steep cost of a college education, and the risk of not finishing a degree; an elected official or policymaker frustrated that the same old educational reforms just aren’t making a difference; or a Massachusetts taxpayer looking for a much better return on those hard-earned dollars you keep investing in the Commonwealth’s K-12 schools and public higher education institutions, here is a solution for all three of you:

In its simplest form, Early College involves high school students taking classes for college credit; sometimes at their own school, but more often on a college campus.  Costs are typically shared by the high school, the college, and the student; and occasionally supported by other sources of public or private funds.  Credits earned are generally accepted toward a degree by the college itself, and increasingly as transferrable credit by other colleges.

Some form of Early College has been around for decades.  When I was a high school student, I took an old-fashioned correspondence course in World Literature—yes, the kind that involved actually hand writing essays on notebook paper and mailing them in to a remote professor who wrote comments in the margins, a grade at the top, and mailed them back to me.  As a high school senior who had completed all of my required credits, I also took an American History course at my local community college, where in 1985 I was the youngest person in the room.

Today, Early College is an increasingly popular option for thousands of students across the Commonwealth, with partnerships growing in Salem, in Holyoke, in Lynn, Fitchburg, Lowell, Pittsfield, Boston, and elsewhere.

Here at Northern Essex Community College, since 2013, more than 2,500 Early College students from nearly every high school in the lower Merrimack Valley have enrolled in more than 4,000 classes, saving over $4.5 million toward the cost of their degrees. Annual Early College enrollment at NECC has grown to more than 500 students.

And now, we are working with two state-designated Early College partnerships, one with the Lawrence Public Schools and one, announced by Governor Baker just last week, with Haverhill Public Schools.

These state designations will give us the opportunity to expand Early College enrollment for students who will typically complete at least 24 credits (about a year’s worth of college) and in some cases their entire Associates degrees by the time they graduate from high school.

A new report by MassINC called Investing in Early College: Our Most Promising Pathway shows why it is absolutely essential for us to invest public support in Early College immediately.

Here are just a few of the report’s overwhelmingly convincing highlights:

The state of Massachusetts is the most educated state in the nation.  Nearly half of the adults in the Commonwealth have a college degree.

But geography is destiny, and there are places in the state, especially Gateway cities like Lawrence, Springfield, Fall River, New Bedford, and elsewhere, where fewer than 20% of adults have reached that level of education; and places like Haverhill and Holyoke that are struggling with less than 30%.

Getting more students into Early College programs that have a stable source of public funding, through high school and a college degree is not just the right thing to do to level the playing field; it’s the smart thing to do for our local and state economies.

The graduates of NECC’s Early College programs at Haverhill High School, Lawrence High School, Whittier Tech, Amesbury, Greater Lawrence Tech, and all of our other partners are more likely to go on to college; won’t need remedial coursework when they get there; are more likely to complete their bachelor’s degrees; those degrees will cost less; and they will have less student loan debt as they embark on their adult lives and careers.

Elected officials and policymakers:  Let’s move on one or more of the MassINC report’s recommendations to bake expanded Early College funding into the K-12 Foundation Budget, funding for higher education, or a new Early College trust fund.

And Massachusetts taxpayers everywhere: Encourage these Early College partnerships and participation any way you can, and let your mayor, town manager, school committee members, city councilors, state representatives and senators know you want less of your tax dollars spent on unemployment, subsidized health insurance, and incarceration, and more on education—for the future of the Commonwealth.