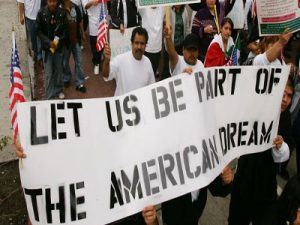 Immigration has been an essential part of higher education in America since long before we were a nation:  John Harvard, the great benefactor of America’s first college, was born and raised in Southward, England.  He emigrated to Massachusetts in 1637 and lived in the Bay State barely a year before dying in 1638 and leaving his estate to the school that eventually bore his name.

And immigration continues to contribute to higher education in vital ways today:  At their next meeting in Worcester on May 9, the Massachusetts Board of Higher Education is expected to approve the appointment of Dr. Luis G. Pedraja, a Cuban immigrant who grew up in a low-income Miami neighborhood before becoming the first in his family to attend college, as the next president of Quinsigamond Community College, and the most recent new higher education leader in Massachusetts.

Colleges and universities nationwide depend on immigrant and foreign visiting students, faculty, and staff as contributors to research and teaching, to campus cultural diversity, and, increasingly, to enrollment and their local economies.

Over the past five years, an average of 84% of NECC’s students each semester are U.S. citizens. The other 16% include permanent residents (green card holders), foreign students on visas, undocumented students, and students whose status we do not know.

Approximately 93% of NECC’s employees are U.S. citizens. The other 7% includes permanent residents and others on work visas.

We are a nation of laws.  Some of those laws govern immigration, and who may visit, study, work, and live in our nation.

Although the practice of controlled or closed borders around the world is relatively new—most countries only began adopting strict border controls after World War I, to manage the mass migration of people displaced by the conflict—every nation in the world now has some measure of border control and security in place, or at least declared.

Here in the U.S., a new administration in Washington has brought increased attention to border control and immigration issues we have been grappling with as a nation—and as educators—for decades.

And some recent actions by the Trump administration have created significant challenges for higher education.

For example, the decision to attempt to bar travelers, including students, from seven, later amended to six, predominantly Muslim countries has created considerable uncertainty for international students. Though the ban has been put on hold by a federal court, it is still unclear whether students from the affected countries — Iran, Libya, Somalia, Sudan, Syria, and Yemen — will be able to get visas to study in the United States next fall. And because of the uncertainty around what actions the Trump administration may take next, even potential students from countries not specifically mentioned in the proposed ban are showing hesitancy around enrolling in U.S. colleges and universities.

International recruitment and enrollment has not been a significant factor for NECC in the past; but with current budget and enrollment challenges, and with our efforts to build more bridges to the home countries of our immigrant populations here in the Merrimack Valley, it has become a necessary strategic part of our future—and at this point, that future is cloudy at best.

And then there are those young people, known as the “Dreamers,” who are caught in a particularly vulnerable position right now: The children of unauthorized immigrants who either entered the United States illegally or overstayed their visas, “Dreamers” were given special protection in 2012 by the Obama administration. The Deferred Action for Childhood Arrivals, or DACA, program provides them with a two-year period of deferred action on deportation, eligibility for a work permit, and the ability to go to college.

Still, as reported afterward in the Boston Globe, local students covered by DACA are not reassured, given the president’s tendency to suddenly change his mind about issues like this.

A Day Without Immigrants

Tomorrow is May 1, “May Day.” In many countries, for more than a century now, it has also been known as International Workers Day, or “Labor Day.”

And out of recognition for the increased attention on immigrants in the United States, Cosecha, which describes itself as “a nonviolent movement working to win permanent protection, dignity and respect for the 11 million undocumented people in this country,” is promoting a “Day Without Immigrants.” Cosecha organizers are asking immigrants and supporters to skip activities such as school, work, shopping, and banking to demonstrate the value of immigrant labor and purchasing power.

Immigrant “Unity Marches” will be occurring in cities around the country, including Massachusetts’ own “Immigrant City,” Lawrence, where Cosecha will join local residents and organizations in a march that begins in the Campagnone Common at noon.

While some faculty, staff, and students from NECC may be participating in the Unity March in Lawrence, others will be gathering on campus at noon for a forum on “Immigration and Higher Education.”

The forum will feature General Counsel for the Massachusetts Community Colleges Ken Tashjy, who will be providing legal perspectives on President Trump’s executive orders, the status of DACA students, the roles and responsibilities of local and campus law enforcement officers, the meaning of “sanctuary” status, and other pressing topics.

And for my part, I will be sharing what I believe about immigration and higher education, and what actions the college can, and cannot, take to both protect our students and comply with the law.

We are a nation of immigrants.

Continued immigration is vital to our identity, our economy, our safety, and our future as a global model for democracy.

We are a nation of laws.

Some of those laws govern immigration, and who may visit, study, work, and live in our nation.

Now, one of the big fears about immigrants seems to be crime, and accusations that those seeking asylum or citizenship are violent criminals. But a growing body of research, such as this report from the Sentencing Project, and this one from the Cato Institute, consistently shows that immigrants generally have lower rates of crime and incarceration than native-born U.S. citizens.

When I consider these facts about immigrants and immigration, and recognize the importance of foreign born students, faculty, and staff as contributors to research and teaching, to campus cultural diversity, and to enrollment and the economies of the cities and towns we serve, from my perspective as president of Northern Essex Community College it is clear to me that we must do everything we can to ensure safe, broad access to higher education for immigrants on our campuses.

Therefore, it will be helpful for students, faculty, staff, and the public to know the following information:

Protection of Student Information and the Role of Campus Public Safety

Student record information is protected from unauthorized disclosure under the federal Family Educational Rights and Privacy Act (FERPA). According to the law, the college will not release a student’s educational records absent a student’s prior, written consent or as required under the law.

Northern Essex Community College has an open admissions policy and does not require information about the immigration status of any of our students in order to enroll or take classes at the college.

If someone from a federal agency arrives on campus and requests student information, they should be directed to the office of Tina Favara, Dean of Enrollment Services and Student Life, tfavara@necc.mass.edu or 978 556-3720.

Requests for student information can also be directed to Sue Shain, Registrar, sshain@necc.mass.edu or 978 556-3710.

From John Harvard to Luis Pedraja, across four centuries, one-hundred-and-fifteen congresses, and forty-five presidencies, immigration remains an essential part of the success of American higher education, all around the country, and right here at NECC.