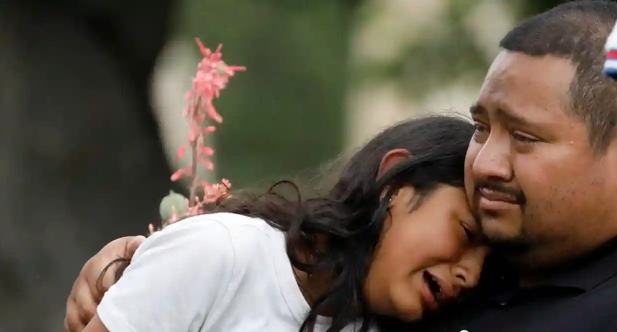 Note: This article appeared in the May 29 issue of Commonwealth Magazine and the May 29 edition of The Eagle-Tribune.

Nearly a decade ago, on December 19, 2012, I shared this message with the college and our community about the worst school mass shooting in American history:

Like parents across the country and around the world, I’ve been holding my children even more closely this week.

The massacre at Sandy Hook Elementary School in Newtown, Connecticut last Friday that took the lives of 20 children, six teachers and staff, the gunman and his mother was beyond horrific.

Communities and institutions have been doing what they know to do, and what they feel they can do.  Schools (including NECC) are reviewing their security measures, and offering as much assurance, and as many resources, as they can to worried students and their families.  Flags are flown at half-mast, and tributes are paid to the victims, most of whom were only six years old.

Down the street in Lawrence, after a Sunday evening prayer vigil, Mayor Lantigua and Police Chief Romero announced a gun buy-back program, in the hopes of doing something—anything—to prevent further violence.  Similar programs, like Baltimore’s “Goods for Guns” are being rolled out in cities coast to coast.

In the individual and collective soul-searching that is taking place in the wake of Sandy Hook, important questions are being asked, and some bold statements made, about individual rights and responsibilities, mental health treatment, and gun ownership in America.  Whatever your position on any of these issues—and particularly if you are not sure of it—now is certainly the time for reflection and, perhaps this time, action.

In Man’s Search for Meaning, Viktor Frankl describes his experience as a survivor of three Nazi concentration camps that took the lives of nearly all of his family, including his wife and his mother, and so many others.  He persevered by finding meaning for himself in every moment of his life—and by keeping a fierce hold on his hope for the future—even in moments of unspeakable agony.

“There was no need to be ashamed of tears,” Frankl writes, “for tears bore witness that a man had the greatest of courage, the courage to suffer.”

As we reflect on this week, and look forward to the one that lies ahead, may we find some meaning in this suffering, and keep a fierce hold on our hope for the future.

Holding onto that hope feels more challenging, and more important, than ever this morning.

Yesterday, at the Robb Elementary School in Uvalde, Texas, in what has now become the second worst school mass shooting in American history, 19 children and two adults were murdered by 18-year-old Salvador Ramos, whose motives are not yet known.

And almost nothing has changed.

In the 3,448 days between the Sandy Hook massacre and yesterday’s tragedy in Texas, according to the Gun Violence Archive, America has experienced more than 3,500 mass shootings (more than one a day), including last week’s slaughter of ten black people by a teenage white supremacist at a Buffalo, New York grocery store.

And in the 3,448 days between the Sandy Hook massacre and yesterday’s tragedy in Texas, not a single piece of legislation has been passed in Congress that would curb the relentless violence, despite a number of bills presented with some bipartisan support that would take steps that polls show most Americans favor, such as expanded background checks, and limiting the availability of assault weapons.

An editorial this morning in France’s Le Monde newspaper expresses both anguish and outrage over the shootings, declaring, “If there is any American exceptionalism, it is tolerating the fact that schools in the United States are regularly turned into bloody shooting ranges.”

Albert Einstein famously observed that, “We cannot solve our problems with the same thinking we used when we created them.”

We need a new generation of thinkers to solve this problem, because this generation has clearly failed and, in the decade since Sandy Hook, has demonstrated that it is incapable of moving beyond the same weary, well-worn script for what comes next following mass shootings: lamentations, “thoughts and prayers,” bold declarations about individual rights and responsibilities, mental health treatment, and gun ownership in America.

On college campuses across the nation right now, it is commencement season.

We need some bold members of the Class of 2022 and beyond to think differently about this uniquely American tragic condition.

We need grads with degrees in healthcare and marketing and communications to reconceive this national crisis not as a political battle over gun rights, but as a public health crisis that we can manage more effectively, as we have shown the ability to do with workplace accidents, smoking, automobile crashes, and other societal ills that at one time killed many more Americans each year than they do today.

We need newly minted engineers to research and create “smart guns” that, like our iPhones, are useless to anyone but their owners.

We need graduates in criminal justice, legal studies, and mental health and human services fields to design far better systems for supporting and caring for people in crisis before they reach a deadly breaking point.

Most of all, we need a new generation of civic leaders, with or without degrees and from any background at all, willing to throw out the tired, ineffective old playbook, move beyond today’s intensely polarized politics, and discover the common ground in our common humanity.

We cannot wait and witness another decade of these tragedies.

Class of 2022 and beyond, new generation of thinkers, we need you now.