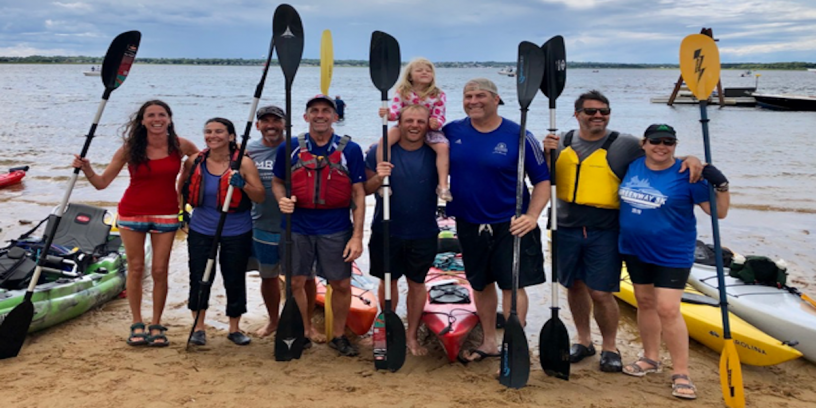 The ebbing and flowing of the Merrimack River has been the heartbeat of New England life for centuries.  From colonial fishing and farming villages, to the mills built on its banks in the earliest days of America’s Industrial Revolution, to the recreational boathouses and marinas that line the shore today, the Merrimack draws us closer to the power, the beauty, and the abundance of nature.

The Merrimack also offers the nearly 700,000 people who live in the sixty-five cities and towns along its banks in Massachusetts and New Hampshire a common thread and shared purpose—a way to feel and to be part of a community.  While there are many things that may separate us—politics, wealth, education, and more—the Merrimack brings us together.

It was this spirit of common purpose and togetherness that formed the Merrimack River Valley Voyagers, a group of local leaders who recently spent four days paddling and camping along the 117-mile length of the Mighty Merrimack, enjoying its beauty and bringing attention to its environmental needs, and economic, educational, and recreational opportunities.

I had the privilege of helping to organize the core group of Voyagers, who kayaked the full length of the river, including State Senator Diana DiZoglio, State Representatives Jim Kelcourse and Christina Minicucci, President of the Greater Haverhill Chamber of Commerce Dougan Sherwood, Executive Director of the Lawrence Partnership Derek Mitchell, President of the Merrimack River Watershed Council Board of Directors Dan Graovac, and Executive Director of Groundwork Lawrence Heather McMann.

In addition to this adventurous lot, a number of other community leaders in both New Hampshire and Massachusetts jumped in boats and joined us for a day or two along the river, including State Senator Edward Kennedy, State Representatives Linda Dean Campbell and Andy Vargas, Newburyport Mayor Donna Holaday, and Newburyport City Councilors Barry Connell and Charles Tontar.

We managed to draw plenty of attention to our trek, with ample social media coverage, prominent stories in newspapers in the major cities along the river, interviews and updates on NPR, spots on local cable television, and an upcoming feature in the fall issue of Merrimack Valley Magazine, thanks to editor Doug Sparks, who paddled along and camped with us for part of our journey.

They were four incredible days. Each of us has tales to tell (and some we may just keep to ourselves), and I encourage you to ask the Voyagers to share some of their favorites when you see them.

Here are just a few of mine:

We launched our kayak flotilla in Franklin, New Hampshire, where the confluence of the Pemigewasset and Winnipesaukee Rivers form the headwaters of the Merrimack, early in the morning on August 7.  A few of us were experienced kayakers, and some were new to paddling, but the northernmost part of the river is mostly wide with a gentle current, giving everyone a chance to get their sea legs underneath them for the first few hours.

The first twenty or so miles are also some of the most rural and least developed portions of the river, and we enjoyed the company of geese, egrets, great blue herons, and a pair of eagles that soared overhead, fishing for their breakfast.

The birds we all expected, but the bovines we did not.  Somewhere south of the Hannah Dustin Massacre Sitein Penacook, New Hampshire, we were greeted by a herd of cows that came running (really, not making this up) through a grove of trees on the riverbank, down into the water for a midday dip.

We had planned a late afternoon press conference with Congresswoman Annie Kuster at the New Hampshire Technical Institute south of Concord, but thunderstorms drove us off the river early; and instead of camping where we had planned, at the White Sands Conservation Area in Pembroke, we found shelter from the storm (along with pizzas and a few spirited rounds of forty-fives) at the Push-Me-Pull-You Llama Farm in nearby Canterbury.

Refreshed and ready to roll down the river the next morning, we met Thomas O’Donovan, Director of the New Hampshire Department of Environmental Services Water Division at our launch site to learn more about one of the big challenges facing the Merrimack River today.

Although the river is much cleaner than it was a generation or more ago, when industrial waste and household sewage had turned it into a toxic flowing cesspool, in 2015 it still made American Rivers annual list of “America’s Most Endangered Waterways” mostly due to the large amounts of “combined sewage overflow” or “CSO’s” that are dumped into the river after large storms—like the one we experienced on our first afternoon.

The Merrimack River Watershed Councilestimates that, last year, at least 770 million gallons of untreated sewage was discharged into the Merrimack from urban sewage treatment systems in Manchester, Nashua, Lowell, Lawrence, and Haverhill.  While all of these cities are taking steps to limit and eventually end CSO discharge, costs run into the hundreds of millions of dollars, and it will take decades or longer to accomplish.

Just two days before we set out on our journey, the Massachusetts State Senate passed a billbased on legislation originally filed by one of our Voyagers, Senator Diana DiZoglio, that would create a “Merrimack River District Commission” comprised of state and local officials, and members of regional and environmental groups, to comprehensively study the river and create a regional plan for addressing environmental concerns.

Just a few miles downstream on Day 2, we pulled our boats out of the water to portage around the Hooksett Falls Dam, an operation requiring nine paddlers to haul eight boats (seven singles and a tandem) a quarter mile or so along the riverbank, over some railroad tracks, and launch them back in the stream again on the other side.

It was also the first opportunity for some of the daredevils in our paddling pack to try to run the rapids and smaller falls at the foot of the Hooksett Dam—and for others to wait downstream and catch their gear before it floated away after a tumble or two!

Packing, paddling, and portaging together really brought out the best in everyone, including this marvelous show of bipartisan crewing as Republican Representative Jim Kelcourse took a turn in the tandem with Democratic Senator Diana DiZoglio—working together to get things done for Massachusetts!

After a public event and press conference at the Amoskeag Fish Ladder Dam highlighting some of the environmental concerns for the Merrimack, the Voyagers had a chance to portage again and run the five-mile urban canyon stretch of rock-strewn rapids through Manchester, New Hampshire…

…en route to the Independence Rowing Club in Nashua, our camp site for the evening (after another thunderstorm chased us off the river a few miles short of our targeted landing spot).

Day 3 was a big one for us, as we paddled our way into Lowell for a press conference at the UMass Lowell Bellegarde Boathouse, followed by a trailer portage around Pawtucket Falls, another launching behind the Lowell Spinners Stadium, and an evening landing with a friendly hometown crowd at Greater Lawrence Community Boating.

Groundwork Lawrence’sHeather McMann and the Lawrence Partnership’sDerek Mitchell led our press conference at the Abe Bashara Boat House, where we talked about the magnificent contributions GWL has made to cleaning up the river, as well as economic and workforce development opportunities along the Merrimack.

And I shared this proud fact with the crowd:  Northern Essex Community College has nearly 40,000 active alumni, and more than 25,000 of them live along the Merrimack River today—in every single city and town in the Merrimack Valley, from Franklin south through Concord, Manchester, Nashua, Lowell, Lawrence, Haverhill, and out to Newburyport, Salisbury, and Plum Island.

Literally everywhere you go in the Merrimack Valley, you can find an NECC Knight!

Just below the Stone Dam in Lawrence, the Merrimack River rises and falls as much as nine feet, with the tide pushing in through the mouth between Salisbury and Plum Island, and flowing back out again into the Atlantic Ocean.

Our destination on Day 4 was 27 miles downriver, where low tide at Plum Island was at 2:30 in the afternoon.  We wanted to ride the tide out to the beach, and definitely not get caught paddling against it across Newburyport Harbor.

That meant a 6:00 a.m. launch from Pemberton Park in downtown Lawrence, as the sunlight was just beginning to spill across the mill buildings that line the riverbanks.

By 9:00 a.m. we were a couple miles outside of Haverhill, where Jessica Winiecki, a member of the city’s Harbor Commission and River Access Committee, helpfully provided homemade Sunday brunch for the Voyagers dockside behind her house on the river.

After landing and docking our boats in Haverhill, we walked along Merrimack Street downtown, stopping by the construction of The Heights, future home to NECC’s Hospitality and Culinary Arts Institute, and a public event led by Greater Haverhill Chamber of CommercePresident Dougan Sherwood behind Harbor Place, the five-story building at the Basiliere Bridge that is helping to transform Haverhill’s riverfront.

With no time to lose if we wanted to beat the turning of the tide, we hopped back in our kayaks for our final push to the sea.  Just as we paddled across Newburyport harbor, a squall kicked up, blowing heavy winds and some pelting rain as our boats began to land, one at a time, on the sand at Captain’s Landing on Plum Island.

The journey of the Merrimack River Valley Voyagers was a physical accomplishment: 117 miles, 30 miles a day, with five portages, several rapids runs, two full-blown thunderstorms, and a sea squall.  We paddled, carried kayaks, pitched tents, slept on the ground, baked in the sun, and soaked in the rain.

The Voyagers’ journey was also a public awareness accomplishment: We brought a tremendous amount of attention to the environmental challenges the river faces, and the policies, politics, and economics of responding to those challenges.

And most of all, our journey was a community accomplishment, creating and deepening relationships among our hardy band of voyagers, and with friends and fellow travelers all along the way, where this river we now all know so much better endlessly ebbs and flows, the beating heart of the Merrimack Valley…