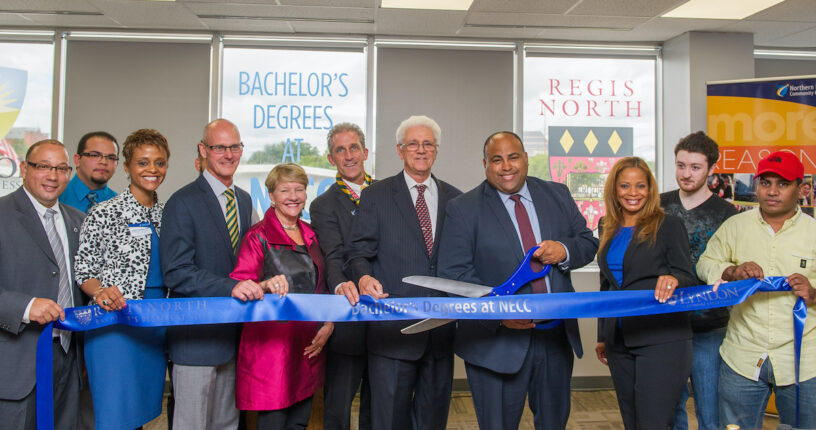 AMANDA SABGA/Staff photo. A ceremonial ribbon cutting during the announcement of a new space used for the partnership between NECC, St. Regis North and Lyndon State College that will allow students to pursue their Bachelor's Degree. 9/7/17

NOTE: This article ran in the January 9, 2021 edition of the Eagle-Tribune.

A decade ago, the Federal Reserve Bank of Boston released “Lessons from Resurgent Cities,” in which they set out to discover the “secret sauce” that enabled some mid-sized industrial cities in New England to bounce back and thrive while others shriveled and died.

In their report, the Fed found a few expected ingredients—higher levels of education among residents, hospitals and universities as “anchor institutions,” transportation hubs such as shipping ports or train stations—and one crucial element that turned out to be most important of all: civic leadership and collaboration.

As the Boston Fed’s President and CEO, Eric Rosengren, explained to a business roundtable in 2012, “Resurgent cities have developed a vision for progress that has the shared support of the entire community and a variety of leaders.”

In other words, when it comes to leading positive change for struggling cities, there is no “I” in “TEAM.”

That’s just one of many reasons that, as Dan Rivera leaves office this week after seven years as Lawrence’s mayor to become the next president and CEO of MassDevelopment, the city, the region, and the Commonwealth owe him our thanks.

Throughout his two terms as mayor, this “Lawrence kid” as Rivera calls himself, has been far more interested in getting good things done for the city and its residents than in who gets the credit for it.

Mayor Rivera would be the first to say that the tremendous progress Lawrence has made since he took office in 2014 has been the result of, as Rosengren recommended, “the entire community and a variety of leaders.”

And what tremendous progress our city has made.

In 2011, a tabloid-style sensationalist headline in Boston Magazine famously labeled Lawrence the “City of the Damned,” for the financial, social, and political challenges it faced.

Rather than cowering in a corner and licking its wounds, though, the city, led by Mayor Rivera and dozens of other elected officials, business, and community leaders, stepped up to take on the formidable task of turning Lawrence into one of those “resurgent cities” the Fed was discovering.

Today, in 2021, the New York Times, the Wall Street Journal, the Christian Science Monitor, and other national publications are holding Lawrence up as a model of civic engagement, educational reform, transportation innovation, and more.

Here are just a few of the ways the City of Lawrence is different today than it was when Mayor Rivera was inaugurated for his first term on January 4, 2014:

In 2010, Lawrence was facing a $27 million operating deficit.  The state had to step in with special legislation authorizing the city to float $35 million in bonds, and appointing a fiscal overseer to put the budget back in order.

By October 2019, after a decade of state control, and under Mayor Rivera’s leadership, Lawrence was consistently producing on-time budgets, and annual surpluses; earned three credit rating increases; and had built its cash reserves to nearly $19 million—a cushion that has enabled the city to invest more in much-needed services for its residents.

The state-appointed overseer is gone, and Lawrence is once again in charge of its own finances.

Between the day Mayor Rivera took office in 2014, and mid-March 2020 when the COVID-19 pandemic shut down much of the state, median family income in Lawrence, while still lagging behind, had climbed from 55% to 61% of the national average.

At the same time, long-vacant mill buildings were rapidly filling with commercial and residential developments; home values had taken off, from an average of $213,000 to $359,000; and the unemployment rate, typically twice or more the rest of the state, had fallen to barely 4%.

Oh, and the very first Starbucks in Lawrence opened its doors on Route 114 at the site of the former Showcase Cinema in March of 2019.

The Lawrence Public Schools, which were performing so poorly in 2011 that they were the first district in Massachusetts history to be placed in state receivership, have become a national model for turning around struggling urban school districts.

Student MCAS scores have soared, the dropout rate has been cut in half, and the graduation rate has improved by nearly twenty percent.  The district is emerging from receivership and moving back toward local control, led by Cynthia Paris, the first Latina superintendent in the city’s history.

In higher education, Northern Essex Community College, where Rivera was a trustee before becoming mayor, committed to developing a comprehensive downtown campus in Lawrence, taking down the dilapidated In Town Mall and Registry of Deeds buildings, opening a new $27 million Health and Technology Center, renovating and rededicating the Dimitry Building, and partnering with Regis College and Cambridge College to expand options for four-year degrees in the city.  Enrollment at NECC recently climbed close to 3,000 students, with hundreds more now attending bachelor’s degree completion programs with our “Communiversity” partners.

In the Commonwealth, especially outside of Boston, getting from place to place without an automobile can be one of the biggest barriers to education, employment, healthcare, and daily living for low-income residents of Gateway Cities like Lawrence.

So last year, Mayor Rivera tapped into a modest amount of funding in the city’s cash reserves and created a city-wide “Fare-Free Transit Bus Program.”

The normal cost of a Merrimack Valley Regional Transit Authority bus pass is only $30 a month, which may not seem like a lot; but a survey of bus riders who ended up using the free service showed that nearly 90% earned less than $20,000 a year.

As the Christian Science Monitor reported last March, Mayor Rivera’s move was already being imitated by Kansas City, Missouri and Olympia, Washington, with other cities eyeing similar ways to aid residents, while reducing traffic congestion and pollution at the same time.

During the worst days of Lawrence’s budget crisis, back in 2011, the police department was forced to lay off 41 officers, reducing the total number in the city to 115, and the consequences were immediate and severe: major crimes like murder, aggravated assaults, and robberies surged by nearly fifty percent.

During Mayor Rivera’s time in office the city has restored positions each year: There are now 151 sworn officers on the force.  Just as importantly, the Lawrence Police Department has tripled the number of female officers and significantly diversified its ranks: more than half of the city’s officers are now people of color, and Mayor Rivera recently appointed the first Latino captain and the first Latina detective.

The impact on crime has been equally significant:  Overall crime is at a twenty-year low, and has been reduced by 46% just in the last two years.

The Lawrence Police Department has an active leadership role in the Merrimack Valley Police Academy at Northern Essex Community College, and soon the city’s outdated and deteriorating police station will be replaced by a modern building through a jointly funded project with the state.

Lyndon Johnson once noted, “When the burdens of the presidency seem unusually heavy, I always remind myself it could be worse. I could be a mayor.”

Good days or bad, it often seems everyone else knows just how you should be doing your job—and is eager to tell you about it.

But when a group of several dozen business and community leaders—bank presidents, mill owners, education and healthcare CEOs, non-profit executive directors, and more—got together back in 2014, the very year Mayor Rivera took office, to create the Lawrence Partnership, a public-private collaboration dedicated to “stimulating economic development and improving the quality of life” in Lawrence, Rivera welcomed the help and embraced the effort.

In the years since, working closely with Mayor Rivera and City Hall, the Partnership has launched a $2.5 million venture loan fund for small businesses, attracted new financial institutions to the city, opened the Revolving Test Kitchen for aspiring restaurant entrepreneurs, worked closely with the Essex County Community Foundation to manage millions of dollars in funds for the Columbia Gas explosion recovery effort, launched the Lawrence LEADS Program with the Harvard Business School, and much, much more.

This month, the Partnership’s Board of Directors, which is filled with that “variety of leaders” with a shared vision for progress the Fed found so important for resurgent cities, will greet its newest, and first Latino, chair and vice chair: Lawrence attorneys Wendy Estrella and Socrates De La Cruz.

The work of the Partnership, and all of this magnificent progress the city has made, caught the attention of the New York Times, which last March published “One City’s Road to Recovery Offers Lessons, Hope,” and noted that, “Incomplete and tentative, Lawrence’s progress suggests that concerted efforts to reinvigorate depressed local economies — long considered a waste of time by most economists — might offer some promise.”

Without doubt, this Immigrant City we all love so much still has its challenges.  Only about 11% of adults here have a college degree (compared with about half of Massachusetts residents).  Partly as a result of that education gap, the unemployment rate remains stubbornly higher than surrounding communities, and many residents leave the city each day for lower skilled, lower paying jobs, while others commute into Lawrence for solidly middle-class wages.

There is work still ahead.

But the wind is in our sails and we are moving resolutely in the right direction, thanks to outstanding, selfless leaders like Mayor Rivera, eager to share the credit, and determined, like the good Boy Scout he has been all his life, to always leave the woodpile higher than he found it.

In his last inaugural address, on January 5, 2018, Mayor Rivera shared a list of the city’s accomplishments during his first term, and ended by emphasizing, “I don’t want you to think for one minute that I am taking credit for all that we have done in these last years or that we can do these great things in the next four years alone. This is the work of the staff, the department heads, our state and federal elected officials and our community as a whole.”

Thank you, Mayor Rivera, for your years of putting service above self, for leading us to great accomplishments for our city, and for modeling the way for all those who follow.