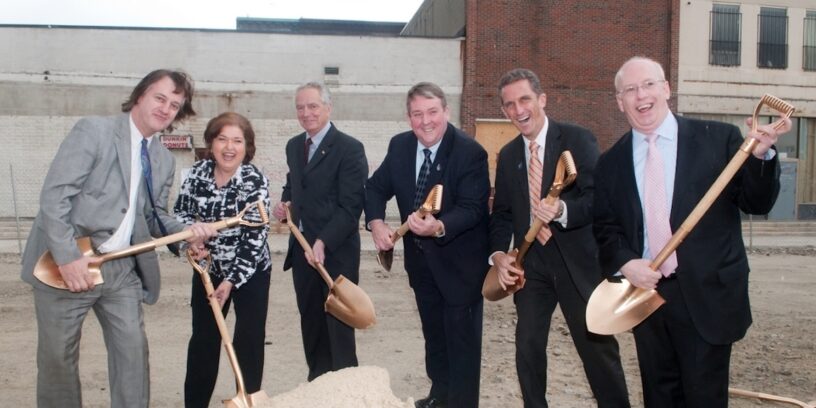 Each and every day I have the privilege of working with incredibly talented and dedicated educators at a community college—an institution I have always prized dearly—toward our common mission of providing affordable, easy to access education to lift up the lives of our students and enrich the communities we serve.

Today is the last day of my tenth year as the president of Northern Essex Community College.

As I look back and celebrate a decade in this job I love so much, these pictures represent just a few of the many memorable moments along the way so far:

April 30, 2012: My family, including my biological and adoptive parents, who were meeting for the first time, gathered for my inauguration and the college’s 50th anniversary.

March 13, 2012: When Boston Magazine ran a scurrilous article about Lawrence headlined, “City of the Damned,” hundreds of people, including many students, faculty and staff from NECC, marched in a “We Are Lawrence” parade to demonstrate our pride in the Immigrant City.

November 26, 2014: Growing partly out of the “We Are Lawrence” pride movement, and building on the work of dozens of dedicated business and community leaders, the Lawrence Partnership formally launched at an event held in the Everett Mill.

April 13, 2012: Members of NECC’s Board of Trustees playing “air shovels” at the groundbreaking ceremony for the El Hefni Health and Technology Center, the newest building on the college’s growing Lawrence campus.

March 17, 2016: Governor Baker and members of the legislative delegation tour the Lawrence Police Station with me, NECC Board of Trustees Chairman Jeff Linehan, and Mayor Dan Rivera to discuss the need for state support to build a new facility. It’s Saint Patrick’s Day, and next to these two giants I look like a leprechaun!

April 24, 2012: As part of NECC’s 50th Anniversary Celebration, we dedicated a plaque on the grounds of the Greenleaf School, where the college offered its first classes to 181 students in 1961.

April 25, 2014: I played the “Hip Hop President” in a spoof of “Freaky Friday” called, “Oh Crap, I’m Old!” for Haverhill Media’s 25th Anniversary Celebration. Curious? You can watch it by clicking here and fast forwarding to 14:30.

March 24, 2014: I went back into the classroom for a semester to teach NECC’s Student Success Skills seminar. This is my class, promoting the Massachusetts Department of Higher Education’s “Within Our Sights” student success campaign.

May 4, 2013: The start of the first annual NECC Campus Classic 5K! A portion of proceeds that year benefitted victims of the Boston Marathon bombing.

December 5, 2015: The President’s Running Club at the Newburyport Santa Dash!

September 13, 2015: I met the legendary local runner Lou Peters (93 years old) at the Lawrence Firefighters 9/11 Memorial 5K and asked him if he would come run the NECC Campus Classic that spring. Without missing a beat Lou replied, “Sure, if I’m still around.” Happily, he was, and he ran on campus in 2016.

NECC on Top of the World!

August 24, 2019: Trekking across the Teton Crest Trail in Wyoming.

June 4, 2017: The Summit of Mount Lady MacDonald in the Canadian Rockies, Canmore, Alberta.

The Happiest Day of the Year: Commencement

May 20, 2017: Umbrellas and sunglasses joined caps and gowns when NECN meteorologist (and former NECC student) Matt Noyes was our 2017 Commencement speaker.

May 19, 2018: My daughter, Thomasina (aka Big Sis T) graduates with her associate’s degree from NECC two weeks before receiving her diploma from Amesbury High School.

May 15, 2021: It was “High Fives & One Big, Beautiful Family” as we donned masks and foam “NECC Grads Are #1” hands for a pandemic-safe commencement this spring.