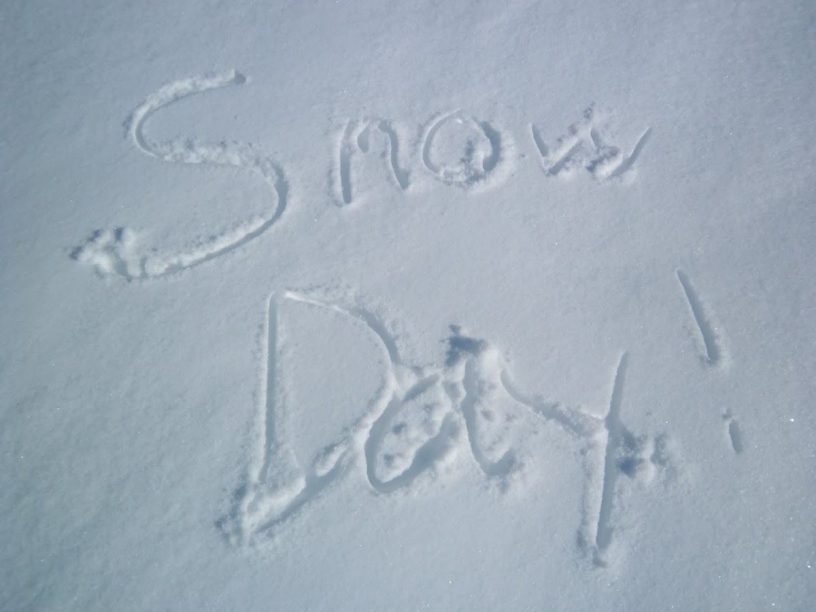 It’s a Sunday morning in mid-January.  I’m sipping coffee and looking out my back window at the gentle snowfall covering the trees and the lawn, relieved that the decision to close NECC’s campuses today was an easy one.  Big storm, just a few community activities scheduled, and classes don’t start up again until Wednesday.

It’s a familiar routine in living rooms across the northeast between January and March:  Kids and parents huddle in front of the television (or the laptop) and anxiously watch the scrolling list of school closings to discover whether the next morning will bring a few extra hours of sleep, or an early alarm clock and plenty of shoveling and scraping.

But who makes the call (and just what are they thinking?)

While there may be variations on this procedure depending on the situation and what events are happening on NECC’s two campuses, here is what we usually do:

The college’s Vice President of Administration and Finance, Mike McCarthy, initiates a phone call or text exchange with the college president (me), and the Vice President of Academic and Student Affairs, Dr. Bill Heineman (who has the best day-to-day knowledge of classes and activities).  Together, we consider a number of factors when deciding whether to close the campus early, open late, or close for an entire day.  We discuss the weather forecast, the expected condition of area roads and our own campus streets and parking lots, whether area public schools are closing, and a number of other criteria.

For daytime classes and business operations, we try to make a decision no later than 5:00 a.m. (some of our healthcare students hit the road by 5:30 for clinical assignments), and for evening classes, we try to make the call by 2:00 p.m.  Once we do, our marketing, communications, and IT staff go to work getting the word out via television and radio stations, our web site, text alerts, and social media like Facebook and Twitter.

Once in a while, it’s obvious and easy:  By 9:00 p.m. on Tuesday night, every forecaster agrees that a storm will roll in overnight, dropping twelve inches of new snow on the ground and lasting until just after lunchtime the next day.  On cue, the storm arrives at 2:00 a.m.  By 5:00 a.m., before the buses and cars start rolling, we know that it will take hours later that afternoon and evening to clear the roads and parking lots for safe travel, so we cancel classes and close the college for the entire day.

And often, it’s a bit trickier.

One forecast warns that the Nor’easter heading toward us is a doozy, certain to hit land along the coast around 4:00 a.m. and blast us all day long; while another insists the storm is going to blow safely out to sea and all will be safe and calm.  Mike, Bill, and I are sipping coffee, watching WBZ, and looking out the window at 5:00 a.m. and nothing is happening—yet.

A couple of school districts close to the coast have closed for the day, but the inland cities and towns haven’t decided yet (and since they have missed so many days already, and want to avoid extending the school year into July, Superintendents Marotta and Paris in Haverhill and Lawrence are likely to jump on plows themselves and clear the streets to keep their schools open).

It’s tempting to say we should err on the side of safety, and close every time there is even a threat of inclement weather.

I completed my doctoral program and taught briefly at Michigan State University back in the early 1990’s.  East Lansing, Michigan and Haverhill, Massachusetts lie at the exact same latitude: 42.7 N and have about the same amount of average snowfall each year: 50 inches.

Historically, the presidents of Michigan State University have proudly refused to cancel classes for something as common as a little snow.  After all, most of the university’s 42,000 students live on or very near the campus, and can easily make the trek from dorms or apartments to classrooms and back.

In its 160-year history, MSU has only cancelled classes four times because of snow.

Then, one cold day in January, the Storm of the Century—an Arctic Blast from beyond Baffin Island—was barreling down on the Mitten State.  Residents of mid-Michigan were warned to stockpile food, water, batteries, and fuel, and prepare for a three-day siege.

In order to give students, faculty, and staff time to prepare for the approaching Armageddon, MSU’s president relented, and took the unprecedented step of announcing a campus closure—a day in advance.

The storm indeed came barreling down out of the north, crossed the Mackinaw Bridge into the Lower Peninsula and appeared to be heading directly for Spartan Stadium—then it turned left, charged across Ontario, and battered Buffalo instead.

With an average annual snowfall of nearly 100 inches, Buffalo shrugged its shoulders and threw some rock salt on the driveway.  But back in East Lansing, where it was forty degrees and sunny, the party was just getting started.  Thousands of students with nothing but time and a little beer money on their hands hit the streets for an early spring bash.  They built a bonfire in the middle of Grand River Avenue out of futons and old sofas, and celebrated the early spring—until local police convinced them it was time to go home (and, assumedly, study).

That’s unlikely to happen here (and not just because Grand River Avenue doesn’t run down the middle of campus).

NECC students are concerned about safety—for themselves and their families—but they also want to be able to attend their classes, seek out their tutors and advisors, find library books, and use the gym.  Many also have children of their own with prearranged school or daycare arrangements.  On the rare occasion that we have closed the college and an expected storm didn’t arrive, we have heard about it from understandably upset students.

So, we pore over forecasts, patrol the roads and parking lots, check with neighboring school districts, and prognosticate the best we can—hoping that whatever Old Man Winter throws at us, all of our students, faculty, and staff—and their families—are safe and warm, and still getting the best education we can provide.

And for that, this winter we thank some of our often unsung heroes on campus, like our phenomenal buildings and grounds crew, who have worked well into the night and long before most of us are awake to be sure our trip on to campus is safe and swift, kept sidewalks cleared, doors swinging, and buildings warm and comfortable; and our facilities and events staff, campus registrars, and student services professionals who have had to scramble to find alternate classrooms and offices during weather and building emergencies, and improvise new ways of serving students quickly.

So, if you’re happy about today’s Snow Day cancellation, please be sure to let me know.

If not, call Mike.

And the next time you’re on campus, please save a few kind and thankful things to say to all the folks who keep things safe and warm (and keep your fingers crossed for an early spring).