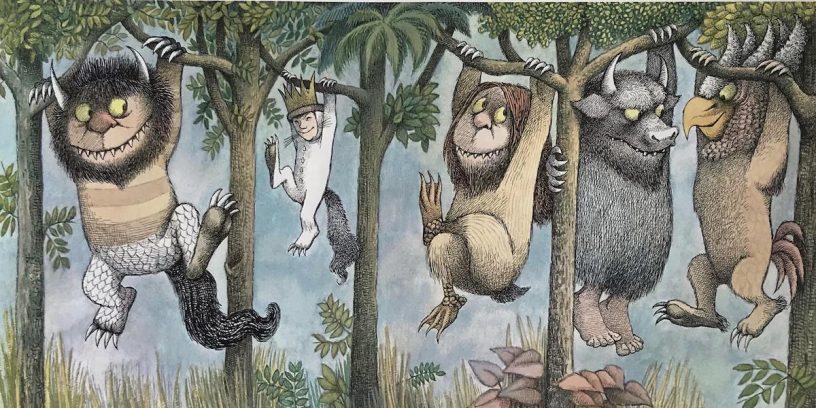 Back in 2012, before I began writing these “Running the Campus” blog posts, I started sending out“Weeklies;” emails to the campus and community that usually included something about what was happening at NECC that week, a perspective on a big issue facing higher education, and a short story about my daughters, who were known back then as “Big Sis T and Little Sis Z.”

Well, Big Sis T was home from college this week, just in time to celebrate my birthday with me, Mrs. G, and Little Sis Z who, far from being “little” is now nearly the tallest member of the family.

Among the birthday presents from Big and Little Sis were a comfortable hiking shirt and a print from one of our favorite bedtime stories when they were young, Maurice Sendak’s Where the Wild Things Are.

Together, they reminded me of one of the early adventures I wrote about, nearly seven years ago this week…

One of the great joys of my life is being outdoors walking (or running) through nature—on a beach, along a river, or, especially, up a mountainside.  Fortunately, here in New England we’re blessed with an abundance of these natural wonders, including 48 peaks higher than 4,000 feet in the White Mountains to our north, and miles of beautiful coastline.

The happiness I find roaming around the Yankee wilderness becomes all-out giddy glee when I get to share it with friends and family.  So, last Sunday afternoon I was on top of the world (or at least up high with a great view) when I had the chance to lead Little Sis Z’s Brownie troop on our “Return to Mount Agamenticus.”

A dozen or so grade school girl scouts, a handful of parent porters, and one Big Sis “jungle guide” spent a few hours hiking around one of Maine’s most scenic and accessible vistas.

Along the way, the girls worked in teams on a scavenger hunt, looking for vernal pools, lizards, animal tracks, berries, “a leaf as big as your head,” and Bigfoot (no one spotted him, but we did hear some unusual rustling off in the trees.)

We also played the “Alphabet Game.”  It works like this:  As we ambled up the trail, I would call out a letter of the alphabet and the girls would shout out something you can find on Mount Agamenticus that starts with that letter.

Oh, the amazing minds of munchkins.

We started out respectfully enough, with the mini mountaineers calling out:

Cats! (as in “fisher” the clever kids quickly explained)

Then things started to get a little whimsical:

They roared. I started to think I was losing control.  Then they discovered adjectives:

By the time we reached Yodeling Yetis and Zippy Zebras we had crested the top of Agamenticus, with views of the Boston skyline far to the south, snowy Mount Washington up north, and the Isles of Shoals far out to sea.

And down below us, the little mountain beneath our feet teemed with wondrous, silly creatures, chomping, growling, slithering, yelping, leaping, flying and cavorting behind the troop of girls in the craziest conga line you’ve ever seen.