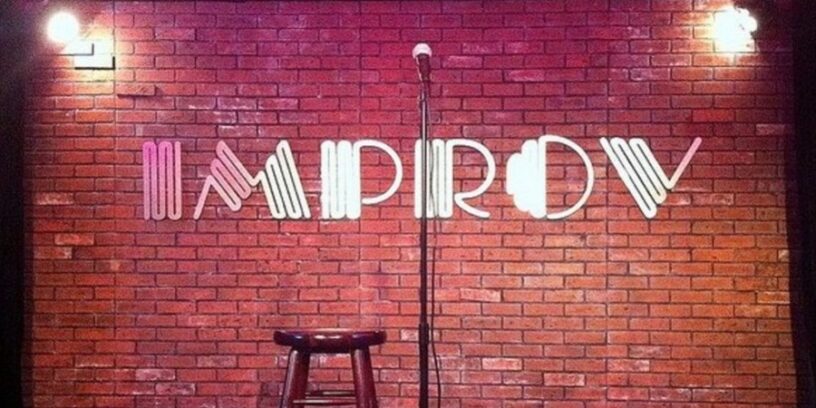 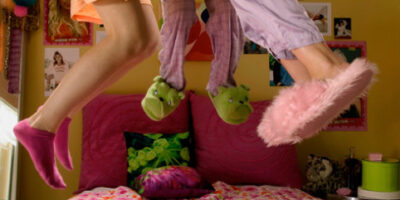 Well, “Big Sis T” and “Little Sis Z” are much older now.  T has graduated from college and is living in Boston’s North End, making and teaching music, and Z is about to complete high school and her associate degree at NECC and head off to study business at a soon-to-be-decided university.

Over the weekend, during a layover in Chicago while traveling west for a family ski vacation, my wife and I caught a performance at the famous Second City improv club, home to well-known comedians like Alan Alda, Bill Murray, Jim Belushi, Gilda Radner, Tina Fey and countless others.

We laughed so hard my cheeks are still hurting.

Watching those amazingly talented performers make up stories on the spot with random words and ideas tossed to them by the audience reminded me of this piece I wrote back in January 2015, which still has some helpful lessons worth remembering: “It’s been an Improvisational week at Northern Essex Community College…”

A Kangaroo Climbs Into a Rowboat…

Get ready.  You have two minutes to respond to this challenge:  How many uses for a paper clip can you think of?  List as many as you can.

If you are over thirty, with a dozen or more years of formal education, a full-time job, kids, and a mortgage, you might have come up with a dozen or so (coffee stirrer, letter opener, fingernail cleaner, etc.) and then run out of steam after a minute or so.

If, on the other hand, you’re a first grader just heading off to school, with an early bedtime, very little homework, and lots of time to play, you probably have fifty ideas on your list (a marshmallow stick, guitar pick, a tool for popping bubble wrap, Christmas tree ornament hook, earrings, and more) and are still going strong.

Why, as we get older, do we seem so often to lose our creativity?

At ten years old, about to be eleven, and faced with the paper clip challenge, Little Sis Z could rattle off a list of quirky ideas a mile-and-a-half long, and have you rolling on the floor in laughter.

Genetically, she has both engineers and artists in her family, and seems to have a talent for whole-brained thinking—along with a lot of energy.  That’s a combination that keeps her hopping from one project to the next, always curious and exploring.

So, when her school offered her the chance to join Destination Imagination, she leaped at it.

Destination Imagination, or just “DI” as the kids call it, is a national program for students in elementary school through college that uses STEM (science, technology, engineering, and mathematics), the arts, and service learning to encourage teams of learners to collaborate, take risks, be creative, solve problems—and have fun doing it.

I’m the “manager” for Little Sis Z’s fifth grade DI team.  I’m not the “coach,” because one of the most important rules of DI for adults is that we are there to help keep the kids on track and make sure they have the resources they need, but we do not provide knowledge or assistance with their “team challenge” that might be considered interference.

The kids make it all up themselves.

DI teams across northeast Massachusetts are preparing for a tournament in March at Greater Lawrence Technical School.  At the tournament, each team will present a major “team challenge” they have been preparing for, and they will complete “instant challenges” that will be presented to them on the spot.

This year, the team challenges include things like “Creature Feature,” in which kids design and build a creature that performs specially selected tasks; “Lose to Win,” a challenge to build the lightest possible structure that will support heavy weights, while pieces of the structure are removed; “Brand Aid,” a community service project for which teams create a marketing campaign; and the challenge that Little Sis Z’s team is enthusiastically tackling:  “The Improv Games.”

Fans of the popular television show “Whose Line is it Anyway?” will understand this challenge right away.  Improvisational comedy, or simply “Improv,” is comedy without a net.  It’s a group of boisterous, creative, risk-taking performers taking ideas from the audience and immediately turning them into characters and stories.

For the last few weeks, Little Sis Z and her team of goofy, quick-thinking performers have been pushing back the furniture and practicing their improv skills on the living room floor.

When they get to the tournament, their challenge will be to quickly create three separate, improvised skits, based on four randomly assigned games, “street performances,” settings and situations.

For example, the Little Rascals might be given sixty seconds to prepare a two-minute sketch involving superheroes, a doo-wop group, a rowboat, and a pet kangaroo.

Faced with that challenge, most of us would quickly retreat to coming up with more uses for a paper clip—but not these kids. Although it looks effortless and unrehearsed, the secret to good improv is a LOT of practice and preparation.

After yesterday’s rehearsal (in which Little Sis’ team found themselves riding an imaginary bus to Wal Mart, having their fortunes told, accidentally eating hot peppers, and lowering themselves into an erupting volcano), they shared some tips they have learned for successful improv—that might just be good tips for a more creative and enjoyable life:

Oh, and one more important tip:  When you’re doo-wopping “Sh-Boom” with Wonder Woman, Captain America, and the Flash, don’t let the kangaroo stand up in the rowboat.