It’s Been a Hometown Week at Northern Essex Community College… 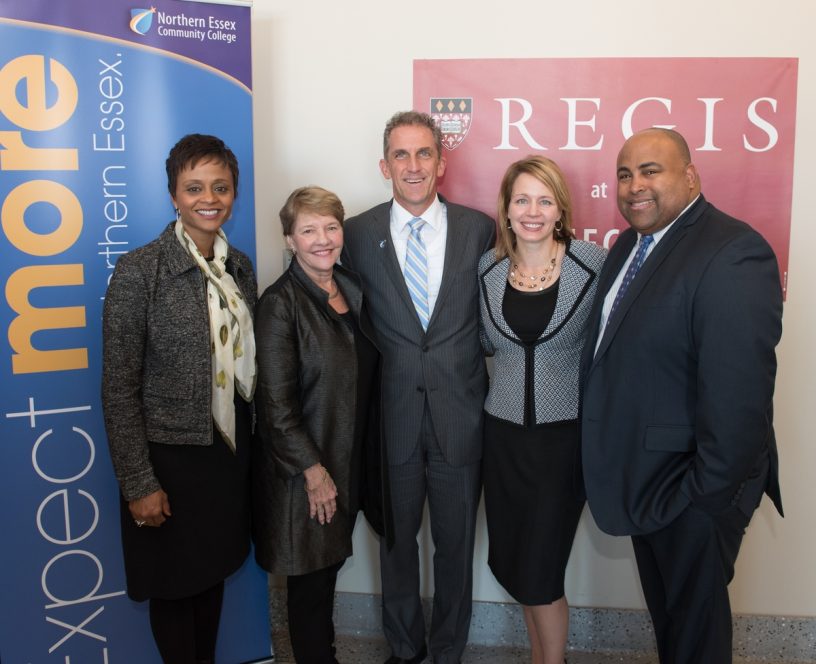 It’s been a Hometown week at Northern Essex Community College.

To help describe the importance of community colleges to local cities and towns, I have often offered this explanation:  Most community college students live within 30 miles of campus—their entire lives.

They attend K-12 schools in their hometowns, then classes at a community college like NECC.  They complete certificates and degrees, and perhaps transfer to nearby four-year universities, or go directly to work.  They marry, buy houses, raise children, contribute to their community, and eventually retire—all less than an hour away from freshman orientation.

This is not unique to community college students.  Although Americans tend to be more mobile than citizens of other countries—moving on average 11.7 times in their lifetime, according to the U.S. Census Bureau’s American Communities Survey—most of us don’t tend to go far.  Nearly 70 percent of Americans still live in the state of their birth.

When you consider that community colleges educate nearly half the undergraduates in America, the “30 Mile Rule” has always seemed to drive home the importance of our role in the communities we serve.  Get to know and support your local community college, and you are supporting the future workforce, economic development, culture, quality of life, and leadership in your community.

Well, when it comes to initial enrollment in college, it turns out my “30 Mile Rule” may have been a stretch, and that most community college students are even closer to campus.

A recently released report from the American Council on Education called “Education Deserts: The Continued Significance of ‘Place’ in the Twenty-First Century,” finds, not surprisingly, that most public college students, attending either two- or four-year colleges and universities—enroll within 50 miles of home.

The mean, or average, distance from home to college for community college students is indeed 31 miles (pretty close to the estimate I’ve been using for years).

But the median distance, which adjusts for outliers like students in rural areas who have to travel great distances, and the relatively small number of students who attend out-of-state community colleges, is only 8 miles.

All across the country, 12 million students attending more than 1,100 community colleges are traveling just a handful of miles to their classes.

Back in September, at the beginning of this academic year, NECC enrolled 6,628 students.  Of those, 5,178, or 78%, came from ten cities and towns within a short drive (or even a comfortable walk) to one of our campuses; and 4,011, or 61%, came from three communities well within that eight mile range: Lawrence, Haverhill, and Methuen.

Periodically, we look at where our students are coming from on a map, according to their home address zip codes.  NECC’sEnrollment Maps for 2014 can be found here, and illustrate, with color coding, how close to home our students—and most community college students—really are.

The “Education Deserts” report notes that we have known for decades that “the further a students lives from a college or university, the less likely he or she is to enroll,” and offers a few possible explanations for this, including:

Distance Elasticity:  Much the same way students may respond to increases in the price of education, the likelihood of enrolling in college, or completing a degree, diminishes as distance increases.  In fact, research suggests that distance may be an even greater factor than cost, particularly for lower income students and students of color (who predominantly attend community colleges).

Spillover Effects:  Usually, just having a college or university nearby means more area residents enroll and receive a college education.  While the study acknowledges that this may be in part because people move to places where higher education is available; it also likely happens because more people are aware of the opportunity, it is easier and less expensive to get to, and colleges and universities form partnerships with local schools and businesses that increase accessibility.

Community Ties:  This one has become more prevalent over the past couple of decades.  The “traditional” college student is no longer the 18-22 year-old living on campus and attending full-time.  These days, most students are older, enrolled part-time, working 30 or more hours a week, and often raising families.  They already have ties to their local communities, and therefore are less likely to travel far to go to attend college.  And again, low income students and students of color are more likely to stay put close to home than affluent and majority students.

All of this student geography is important to know for many reasons:

The Future of the Massachusetts Workforce

“Degrees of Urgency,” a recent report by the Massachusetts Department of Higher Education, sounded the alarm bell that unless the Commonwealth makes big changes soon, we face a shortfall of between 55,000-65,000 college-educated workers by 2025.  One solution to this shortfall, the report suggests, is attracting and graduating more students from underserved populations.

The findings in “Education Deserts” suggest that the best way to do this is to raise the profile of community colleges and state universities—and invest more in them and their students.

Even though Massachusetts has some of the most prestigious and successful four-year colleges and universities anywhere on the planet, that doesn’t matter if you are a potential student with a low-income, no car and limited public transportation, working a couple of jobs, with two kids in day care who just can’t make it to Boston or Amherst.

That’s why NECC, and other community colleges in Massachusetts, have been partnering with four-year colleges and universities on “communiversity” partnerships to bring those bachelor’s degree opportunities closer to home.  UMass-Lowell offers classes on our Haverhill campus, and is building their own branch campus downtown; and in Lawrence we have partnered with Regis College to offer healthcare degrees, and are working with Lyndon State College toward providing degree opportunities in Computer Information Systems, Visual Communications, and Music Business.

The “spillover effects” of having a college nearby happen when that college is actively engaged with area schools and businesses.  One of the ways NECC has been getting more involved with local high schools is through dual enrollment and “early college” programs that allow high school students to earn college credits, graduating with a diploma and perhaps an entire year or more of college courses completed.

Just a few years ago, NECC enrolled about 200 students in these programs.  This year, that number topped 800, and next year we anticipate more than 1,000 high school sophomores, juniors, and seniors will be taking classes through NECC.  And when they do, research shows, they are more likely to continue attending college after graduation, less likely to need an “remedial” coursework, and more likely to complete their degrees.

Each semester, NECC is proud to host students from across the country, and even around the world, enrolling from countries like Kenya, India, Nigeria, Saudi Arabia, Vietnam, Ecuador, Italy, China, and the Dominican Republic.

And each year after commencement, we are pleased to see students transferring to four-year colleges and universities from coast-to-coast, and many places in between.

And we know that after graduation most of our students will not be that far away, going to work in local businesses, hospitals, and schools; or transferring to places like UMass-Lowell, Southern New Hampshire University, Merrimack College, and Salem State University.

Places close to home where they will build their futures—and ours.

They Grow Up So Fast

I started writing stories about Big Sis T and Little Sis Z in journals I have kept for each of them since they were born, and I began sharing some of those stories publicly—through these periodic emails—nearly four years ago today.

The stories give me (and someday Big Sis and Little Sis) a chance to see just how fast they really do grow up.

This week, Big Sis T’s boyfriend baked her a chocolate cake and presented it to her in a box.  When she opened it, there was a one-word question written on top, in yellow icing:

How could she resist such a romantic gesture?  She said yes, and has spent the last few days Googling dresses and hairstyles and eagerly looking forward to spring.

Watching her giddy delight reminded me of one of the first Big Sis T stories I shared, back in March of 2012, when she was just eleven years old.

Here it is—back again.  I guess I should have seen this day coming…

Lastly, on the home front:  Little Sis Z and I knew that something was up when Big Sis T came home every day for almost two weeks complaining about how a neighborhood boy (for purposes of the story, we’ll just call him “Eddie”) was the most annoying, rude, pushy, obnoxious kid on the block.

It could only be love.

Sure enough, T and Eddie (and a few other pals) have spent the last few afternoons together, and are now partners on a make-your-own-seismograph project at the middle school.  Apparently, they are hoping to test their tremor-reading contraption using Eddie’s fleet of remote control monster trucks.

A month ago my little girl thought that the stuff boys played with (balls, rockets, guns, cars, and other loud vrooming devices) were stupid and useless (along with the boys themselves).  Now she’s suddenly matched up with a little lothario and designing machinery to measure the earth moving.

Might be time for a talk with this kid.

As you look back on your week, and forward to the one ahead, may you take pride in your hometown, help build futures close to home, smile and breath a sigh for young love.