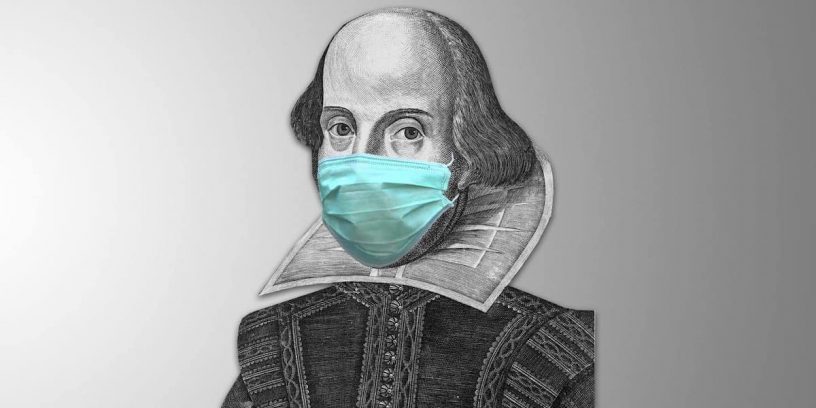 English and Theatre majors, star struck lovers, and fans of Kenneth Branagh all around the world celebrate today, April 23, as the day that William Shakespeare was born in 1564 (and coincidentally also the day he died, fifty-two years later).

One of the great joys of my academic life has been the opportunity to teach Shakespeare’s plays, to roam around London and Stratford-Upon-Avon, and, many years ago, to design a replica of his famous Globe Playhouse for an outdoor Shakespeare Festival in Michigan.

Interestingly, some of Shakespeare’s greatest works, including King Lear, Macbeth, and Antony and Cleopatra may have been written when the theatres of London were closed because of the plague, and everyone was required to do the 16thcentury version of “social distancing.”

The problem pops up repeatedly in his poems, tragedies, and comedies, like in “Venus and Adonis” (written during the London plague of 1593) when the Roman goddess of love, smitten by the young hunter Adonis, begs him for a kiss, “to drive infection from the dangerous year,” because, “the plague is banish’d by thy breath.”

This morning, as a bit of a distraction before the day gets started (and the Zoom calls take over), I dug into the archives to find a couple short pieces I wrote celebrating Shakespeare in my “weeklies” a few years back.  Hope you enjoy them.

Shakespeare is said to have written (or not to have written, depending on who you ask) thirty-seven plays, 154 sonnets, a couple of lengthy narrative poems, and a handful of epitaphs.

He was a great inventor of words and phrases, and whether you know it or not, you probably quote from the famous “Bard of Avon” almost every day.

Imagine, for example, that you suddenly found out you have several relatives coming to visit you from far away.  You haven’t seen them in a while, and they plan to spend a long weekend with you.  You enjoy some of them, and others you would prefer—well, that they just stay home.  But they are on their way and will be at your place in a few hours.

You are frantically trying to get ready when a neighbor comes over to borrow a cup of mead (or maybe a brace of grouse).

Neighbor:  Well, you sure are “a sorry sight.” (Macbeth)  What’s wrong?

You:  I’m “in a pickle.” (The Tempest)  My screwball family is arriving in a few hours, so I have to get everything ready “in the twinkling of an eye.” (The Merchant of Venice)

Neighbor:  I thought you liked your family?  That Uncle Horace of yours is hilarious!  He always leaves me “in stitches.” (Twelfth Night)

You:  Yes, his jokes are pretty funny—the first twenty times.  But after that, it’s “too much of a good thing.” (As You Like It)  And I swear, if he does his imitations of all forty-four U.S. presidents one more time, I’m going to “send him packing.” (Henry IV)  I mean, Nixon and Carter are knee-slappers, but Millard Fillmore?  Really.

Neighbor:  Well, what about your Aunt Matilda?  She’s always so sweet—and helpful.

Neighbor:  Well, what are you going to do?  And why are you cutting a hole in your living room floor?

You:  There’s a “method in my madness.”  (Hamlet)  I’m not going to be made “a laughing stock” (The Merry Wives of Windsor) by this crazy crew.  I slipped some spirits into the tea pot.  Just a few sips, and they will all be sound asleep.  I’ll simply lift up the rug, and “vanish into thin air.” (Othello)

Neighbor:  Wow—sounds complicated.  Why not just pretend to take a phone call and scoot out the back door?

When she is not sure what to say, or when the English language simply proves inadequate for her needs, Little Sis Z has been known to just make up words.

At dinner a few nights ago we were talking about some of her classics.  For example, when she was only a few years old one of her grandfathers was telling her some tall tale about life on the farm that she thought may have been stretching the truth a bit, so she looked him right in the eye and declared, “Grampa, that’s underbelievable!”

And at bedtime, after a kiss on the forehead and a “Good Night, Z, I love you,” she can get a little competitive with her affection, proclaiming, “Good night, I love you morestest!”

DAD:  You know, Z, you’re a bit like William Shakespeare.  He changed around and made up a lot of words, too.

LITTLE SIS Z:  Dad, how come people think William Shakespeare is so hard to understand?  Did he write in another language?

DAD:  Well, sometimes he wrote things to be funny, like the longest word in any of his plays: Honorificabilitudinitatibus.  That’s a mouthful!  He wrote in English; but he did write plays like poetry, with meter and sometimes even rhyme, and he invented words when he needed to.

DAD:  OK, what do you think this means:

To be, or not to be, that is the question—

Whether ’tis Nobler in the mind to suffer

The Slings and Arrows of outrageous Fortune,

Or to take Arms against a Sea of troubles,

And by opposing end them?

LITTLE SIS Z:  Life has its ups and downs.

DAD:  Wow, that’s pretty good!  I think Hamlet would agree with you.  Try this one:

Out, out, brief candle!

Life’s but a walking shadow, a poor player

That struts and frets his hour upon the stage

And is heard no more. It is a tale told

By an idiot, full of sound and fury,

DAD: Hmmm.  A little more Carpe Diem than Macbeth might have been feeling in that particular moment, but you’ve got a point there.  Here’s a speech from Portia, one of Shakespeare’s most famous heroines:

The quality of mercy is not strained.

It droppeth as the gentle rain from heaven

Upon the place beneath. It is twice blessed:

It blesseth him that gives and him that takes.

‘Tis mightiest in the mightiest. It becomes

The thronèd monarch better than his crown.

LITTLE SIS Z:  Um…The Golden Rule?  Do for others what you would have them do for you?

DAD:  You, daughter, are wise beyond your years.  Ok, one more, from the love-struck Juliet:

What’s in a name? That which we call a rose

By any other name would smell as sweet.