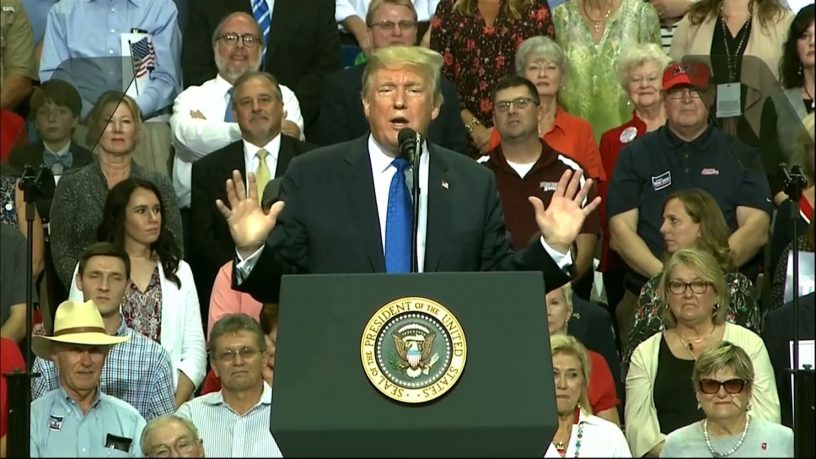 At a rally in Southaven, Mississippi on Tuesday night this week, Donald Trump, the President of the United States, aggressively mocked Christine Blasey Ford, a woman who was a victim of sexual assault, and described her and two other women who have accused Brett Kavanaugh, his nominee for the Supreme Court, approved this afternoon in a 50-48 vote, as “evil.”

As President Trump railed against Ms. Ford for lapses in her specific memory of her assault, his supporters joined in his mockery, laughing, applauding, and waving signs in the background.

All of this took place in the middle of an FBI investigation agreed to by the Senate Judiciary Committee and ordered by the White House, to determine whether there was evidence to support Ms. Ford’s claims.

Regardless of whether Mr. Kavanaugh is guilty of assaulting Ms. Ford or not; irrespective of whether he is qualified to be a Supreme Court Justice; and without consideration for party politics, this scene at that rally presents a deeply troubling picture of American culture today, and a frighteningly daunting one for victims of sexual assault who may already be afraid to step forward and face their assailant.

Since the allegations swirling around Brett Kavanaugh concern his behavior in high school and college, it is worth considering what may have changed since Mr. Kavanaugh was a teenager; the rights of both accusers and the accused; how colleges like NECC seek to ensure student safety today, and the obligations we have to both due process and justice.

The 1980’s, when Kavanaugh attended Georgetown Preparatory High School and Yale University, was a decade that produced a surprising number of hit movies for teen audiences that featured scenes of sexual harassment, assault, and even rape—for laughs.

By today’s #MeToo sensibilities, it may be difficult to watch films like Animal House (1978), Porky’s (1981),Ghostbusters, Police Academy, Revenge of the Nerds,Sixteen Candles (all 1984), and Back to the Future (1985) with female characters who are passed around like the property or prizes of often drunken male “heroes”; and plots that suggest that girls who drink alcohol or go to parties are asking to be assaulted by boys who stick together to help each other get the girl—with or without her consent.

While the impulses and behavior of those loutish male characters and unflattering portrayals of female characters in movies certainly still exist today, you are far less likely to find sexual assault played for laughs in mainstream films post-Harvey Weinstein; and serialized television shows (which are far more popular than movies with today’s teenagers) like Orange is the New Black (2013) and 13 Reasons Why (2017) are credited with more sensitive and realistic portrayals of how sexual violence affects victims.

However, while pop culture may suggest attitudes about sexual assault that are shifting in a more positive direction for victims and their rights, colleges and universities like NECC are currently caught in a quandary caused by rapidly changing federal rules about how allegations of sexual harassment and violence are reported, investigated, and prosecuted.

For decades, higher educational institutions have been responsible for addressing campus sexual assault under both Title IX, civil rights legislation from 1972 that bans discrimination on the basis of sex, and the Clery Act, a 1990 federal law named for a Lehigh University freshman raped and killed in her dorm room that requires colleges to report all crimes that occur on or even near campus.

But a number of high-profile investigations showed that few students knew how to file complaints under Title IX and colleges were slow, or even negligent, in responding to allegations.

So in 2011, the Obama administration’s U.S. Department of Education issued a “Dear Colleague” letter that significantly changed the responsibility of colleges to respond promptly and equitably to reports of sexual violence.  Most notably, the letter declared that the requirements of Title IX that related to sexual harassment also covered any form of sexual violence, and introduced recommendations for, among other things, how colleges should manage alcohol awareness programs, identify “responsible employees” with specific reporting duties, and conduct thorough investigations with particular attention to protection of victims and their rights.  Colleges that failed to follow the Department of Education’s guidance would risk losing federal funds.

One intent of these changes was to create safer environments for victims of harassment or assault to step forward and make their claims, so that someone like Christine Blasey Ford might not feel pressured to wait three decades to share her frightening experience, and this seemed to have worked:  Reports of sexual misconduct on college campuses spiked significantly.  As an example, prior to 2011, NECC typically received no more than one or two Title IX related complaints each year.  By 2015, the number of complaints had risen to nearly twenty, and we hired a full-time Title IX Coordinator with legal training to ensure not only compliance, but fair and equitable treatment of everyone involved.

NECC is not alone.  By 2016, colleges everywhere were staffing up to handle increased caseloads of complaints, and the Association of Title IX Administrators estimated that legal expenses, awareness campaigns, staff training and other efforts to fight sexual misconduct was ranging from $25,000 a year on small campuses to $500,000 or more at larger or wealthier institutions.

The increase in reported incidents of sexual harassment and assaults on college campuses, while seeming to improve the environment for victims, also raised concerns for some that college administrators were overreaching their authority and unfairly convicting those accused—usually men—without due process or sufficient evidence.

Writers for conservative publications like the National Review, Town Hall, and Reasoncomplained that the Obama Department of Education’s “Dear Colleague” letter made accusations as good as a verdict, and, similar to complaints heard during the recent Kavanaugh confirmation hearings, unfairly and needlessly ruined young men’s lives.

Under the new guidelines, colleges can take more time to respond to complaints, may choose which standards of evidence they apply, and are required to share more information with both parties in a complaint, raising concerns among some victims’ rights groups about protections for accusers.

Even as federal policy about sexual assault from both the Obama and Trump administrations was being crafted largely without input from college campuses, four years ago, in the fall of 2014, recognizing that an estimated one in five women and one in seven men are victims of sexual assault in their lifetime, and that the risk of sexual violence is even higher for college women ages 18-22, the Massachusetts Board of Higher Education declared a “zero tolerance” for sexual violence on college campuses in the Commonwealth, including “stalking, dating violence, domestic violence, harassment and sexual assault, which can have devastating effects on individual victims, as well as serious negative consequences for colleges and universities.”

Representatives from the Department of Higher Education and the state’s 29 public colleges and universities worked with expert security consultants to produce “Securing Our Future: Best Practice Recommendations for Campus Safety and Violence Prevention,” a report that has become a roadmap for improving student safety on campuses like NECC.

The fifteen community colleges also collectively created a “Policy on Affirmative Action, Equal Opportunity & Diversity” that, among other things, describes what constitutes sexual harassment or acts of violence and how anyone who feels they have been the victim of such behavior can seek protection and justice.

The community colleges’ policies are meant to reflect some important principles not only of campus governance but of America’s judicial system, and they remain in place today, protecting everyone on campus, including accusers and accused alike.

In other words, according to the Massachusetts Board of Higher Education and the state’s fifteen community colleges’ “Policy on Affirmative Action, Equal Opportunity & Diversity,” retaliating against someone who files a complaint of sexual harassment or violence, even if there is no supporting evidence for the claim, is as bad as actually committing an act of sexual harassment or violence.

The reason for this should be clear: Victims of discrimination, harassment, or violence, even if the exact circumstances of their experience are not completely remembered or are unproven, mustfeel like they are able to step forward and seek safety and justice.  It is the only way victims like Christine Blasey Ford, or the estimated one in five women and one in seven men who are victims of sexual assault in their lifetime, can be safely supported, and sexual violence can be ended.

To connect the dots and put it even more bluntly: If a student at Northern Essex Community College alleged that another student sexually assaulted her, and during the course of the Title IX Coordinator’s investigation, at a meeting of the college’s faculty and staff, I openly mocked the accusing student, I would be guilty of retaliation and the college’s Board of Trustees would, assumedly and correctly, seek to fire me.

Their action would likely be unanimous, and would have nothing at all to do with party or politics.  It would be based in observance of the law, respect for due process, and, most importantly, simple human decency.