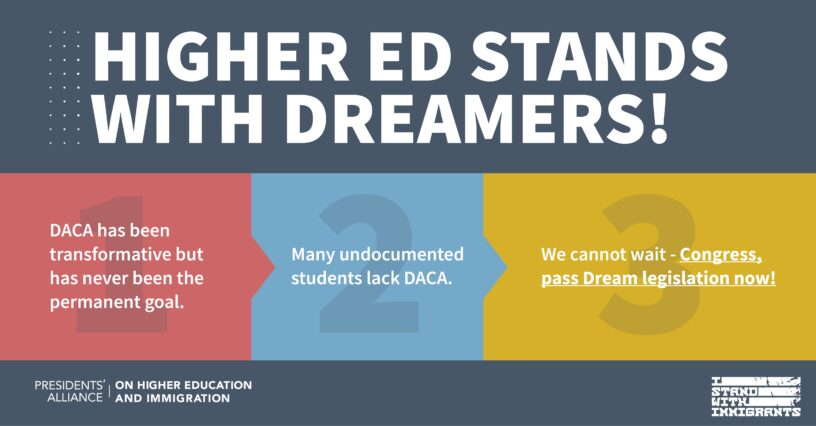 Ten years ago, on June 15, 2012, Secretary of Homeland Security Janet Napolitano, directed by President Barack Obama, issued a memorandum to U.S. customs, border, and immigration agencies: “Exercising Prosecutorial Discretion with Respect to Individuals Who Came to the United States as Children.”

The memo, which outlined the policies and procedures that would become known as Deferred Action for Childhood Arrivals (DACA), urged “prosecutorial discretion” in cases of “certain young people who were brought to this country as children and know only this country as home.”

“Our Nation’ s immigration laws must be enforced in a strong and sensible manner. They are not designed to be blindly enforced without consideration given to the individual circumstances of each case. Nor are they designed to remove productive young people to countries where they may not have lived or even speak the language. Indeed, many of these young people have already contributed to our country in significant ways.“

DACA has always been a temporary, imperfect quick fix calling out for a more permanent solution.

As a presidential executive order, it does not carry the same weight as a law passed by Congress, and as a result, it remains under constant threat of being rescinded.

Further, DACA recipients face travel and other restrictions, and must renew their applications every two years, with uncertainty looming each time.

Still, in the ten years since the memo was issued, more than 800,000 people have benefited from DACA through protection from deportation, access to work permits, and expanded educational opportunities.  They have been able to buy homes, start families, create businesses, and put down roots in their communities.

As New England’s first federally designated Hispanic Serving Institution, with a campus in the “Immigrant City,” Lawrence, Massachusetts, Northern Essex Community College has served a significant number of DACA students, as well as many more undocumented students who have been hesitant to register for DACA protections because of the uncertain future of the program.

One of the brightest stars on our campus right now is a young immigrant.

As a teenager, Sarah Pachano emigrated to Lawrence from the Dominican Republic with her family, seeking better education and employment opportunities.

Today, she is a Philosophy major at NECC, a member of the Student Government Association, a Student Ambassador, and the student body’s representative, appointed by Governor Baker, to the Northern Essex Community College Board of Trustees.  As a trustee, she has been an advocate for improved student mental health services, LGBTQ+ inclusion and representation, and better transportation options between campuses.

Sarah is already what we hope all of our students will become: smart, capable, engaged, and eager to make a positive difference on campus and for her community.

We need Sarah at NECC now, UMass-Amherst will be eagerly awaiting her when she transfers there for her bachelor’s degree, and the Commonwealth’s workforce will welcome her with open arms when she graduates in a few years.

And there are a lot more Sarah’s out there across Massachusetts, on each of the state’s fifteen community college campuses, and at all nine of the state universities and four UMass campuses.

In fact, according to the Migration Policy Institute, there are approximately 16,000

DACA-eligible residents in Massachusetts, and 4,980 active DACA recipients as of June 2022.

Despite its resounding record of success, though, DACA is under serious threat once again.

A few weeks ago, on October 5, 2022, the U.S. Court of Appeals for the Fifth Circuit upheld an earlier District Court ruling that the original 2012 DACA memo is unlawful.

As a result, while current DACA recipients can continue to apply for renewal of their status, U.S. Citizenship and Immigration Services will not be processing any new DACA requests.

This legal uncertainty and tenuous future of DACA is devastating for the hundreds of thousands of young people across the country, and thousands right here in Massachusetts, who have relied on DACA to build lives for themselves.

It is also devasting for the American workforce, already reeling from an unprecedented labor shortage, and it is most emphatically not what most Americans want.

When you set aside the polarization and exaggerated rhetoric from extremists on both ends of the political spectrum, Americans have been remarkably consistent over time in their opinions about some key immigration principles.

American business has been quite clear as well.

On October 20, the Coalition for the American Dream, an organization of “thousands of U.S. businesses, large and small, that represent every major sector of the U.S. economy and more than half of America’s private sector workers,” whose members include Apple, Microsoft, General Motors, Hilton, and many other American companies with global reach, wrote a letter to both Democratic and Republican leaders of Congress, urging them to take action on bipartisan legislation to help Dreamers because, if the DACA ruling stands, more than 500,000 jobs and nearly $12 billion in wages will be lost from the American economy over the next two years.

DACA has been one of the most popular and successful immigration programs in modern U.S. history, but it was never meant to be a permanent solution.

Now is the time for Congress to act on one.

Northern Essex Community College is a proud founding member of the Presidents’ Alliance on Higher Education and Immigration, and today I am joining hundreds of college and university presidents and campuses across the country in calling on Congress to pass bipartisan legislation protecting our DACA students, supporting the will of over two-thirds of the American people and a majority of business leaders, and investing in the future of our nation’s workforce.

Sarah Pachano, and hundreds of thousands of young people like her, cannot wait any longer.