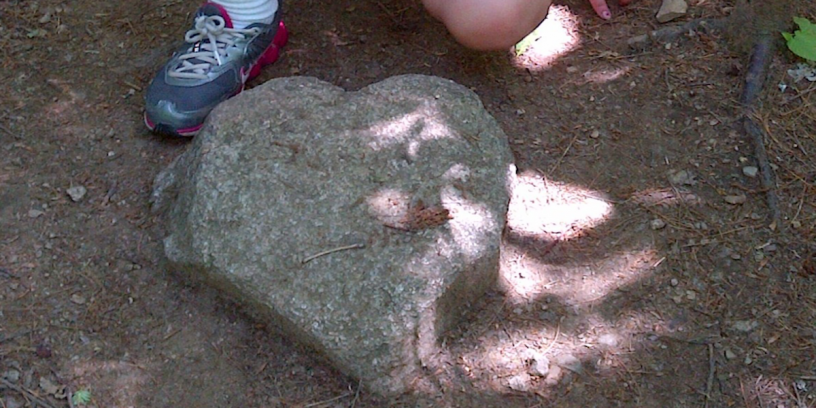 A Special Message to the NECC Class of 2020

Back in 2012, before I began writing these “Running the Campus” blog posts, I started sending out “Weeklies;” emails to the campus and community that usually included something about what was happening at NECC that week, a perspective on a big issue facing higher education, and a short story about my daughters, who were known as “Big Sis T and Little Sis Z.”

I was reminded of one of those stories this week as I was trekking across a mountain in the Canadian Rockies, looked down, and saw this heart-shaped rock in the snow:

Seven years ago, in June 2012, when Little Sis Z was eight years old, I shared this story about attitude, optimism, and perseverance.  Seems just as timely today.

The Henry Ford Village and Museum in Dearborn, Michigan, near Detroit, is promoted as “America’s Greatest History Attraction,” and when you visit it’s easy to see why.  Besides being an inventor and well-known captain of industry, Henry Ford was a busy collector, and at the museum and grounds that bear his name you can see amazing collections of American furniture, clothing, appliances, toys, cars, trains, planes, and more.

My favorite attraction, though, is the gathering of famous housesthat Ford collected from across the country, and assembled in his village.  They include the Wright Brothers’ Cycle Shop (where they first started experimenting with “flying machines”) from Dayton, Ohio; Thomas Edison’s house, laboratory, and original light bulb from Menlo Park, New Jersey, and other famous structures.

And as you walk along the brick-laid streets of Henry’s village, you find famous quotes painted on signposts and the sides of buildings.  One that has stuck with me since my first visit there several years ago is from the automaker himself: “Whether you think you can, or think you can’t—you’re right.”

It’s a practical variation on “Believe it and you’ll see it,” or the great Wayne Gretzky’s, “You’ll always miss 100% of the shots you don’t take.”  There are some things in life you don’t get to choose, but you can always choose your attitude.

Little Sis Z and I were reminded of this last Monday.

With grand ambition and great excitement, she woke up on Memorial Day and declared that we should go hiking; so I packed some sandwiches, two girls, one Airedale, a Nerf football (goes everywhere with us now), and a bottle of bug spray in the car and we trekked off to Mount Agamenticus, just over the border in York, Maine.

The plan was to follow the gently sloping “Ring Trail” for a couple miles around the base of the modest mountain, then climb “Sweet Fern” to the top, eat lunch, toss the ball, take a few pictures, and get back out ahead of the southbound holiday traffic.

Half a mile along, though, things weren’t going well.  Little Sis was piloting the Airedale when he saw a critter off in the bushes and made a quick dash for it, tugging her along after him. She quickly dropped the leash and he dutifully popped right back out of the underbrush, a penitent pooch, but the damage had been done:  several thorny scratches on her arms and a bruised knee from an inconveniently placed log.

Tearful and unhappy, but still determined (and not to be outdone by Big Sis T who was still skipping merrily along), Little Sis picked herself up, brushed herself off, and started all over again.

The sun was shining, the creek was flowing, the birds were chirping and all was right with the world when a previously buried and motionless tree root shot up out of the earth, wrapped itself around her ankle, and yanked Little Sis Z back to the ground (at least, that was her account of the incident a moment later, in between loud wails and large tears).  A matching bruise on her other knee, and muddy shorts to boot.

Z is usually the happiest and most hopeful little person you would ever expect to meet, but this was too much, and suddenly her discouragement knew no bounds.

“I can’t do this!” she cried.  “There-are-too-many-rocks-and-trees-and-it’s-hot-and-I’m-tired-and-every-time-I-move-I-fall-down-and-I-just-want-to-go-home-now!”

Well, do you think I:

I’ll admit, I was thinking about something along the lines of “d” when Big Sis T came to the rescue.

“The trees and the rocks aren’t out to get you,” she told Little Sis, “They’re the best part of the trail.  Remember what Uncle Adam taught you about skiing?  Don’t be afraid of the trees and try to avoid them—enjoy them, and ski in between them.”

Sometimes it’s all in the timing.  Big Sis’ explanation did more to buoy Little Sis’ spirits than any lecture on positive psychology from Dad could have managed.

Now, Little Sis was a jungle explorer, the leader of the pack.  Setting a pace that challenged even her four-legged little brother and rejoicing in the mosses, the mud puddles, the birch trees, and the granite gardens all around her, Z was on a mission to the top of the mountain.

Then, somewhere a few hundred yards from the peak, she made the discovery of the day:  Her “Heart Rock”:

I missed it.  Big Sis T did, too.  The dog was still trying to catch up.  But Little Sis was brimming with excitement and completely open to what nature had to offer—and nature made a peace offering.

That simple stone, chipped and hewn by rain, snow, and ice (and maybe a few mountain bikes); and visible only to eyes looking beyond problems to possibilities, guaranteed that after a rocky start, we would be back on the mountain again one day—probably one day soon.

A Special Message to the NECC Class of 2020