Becoming a Father…and a Son 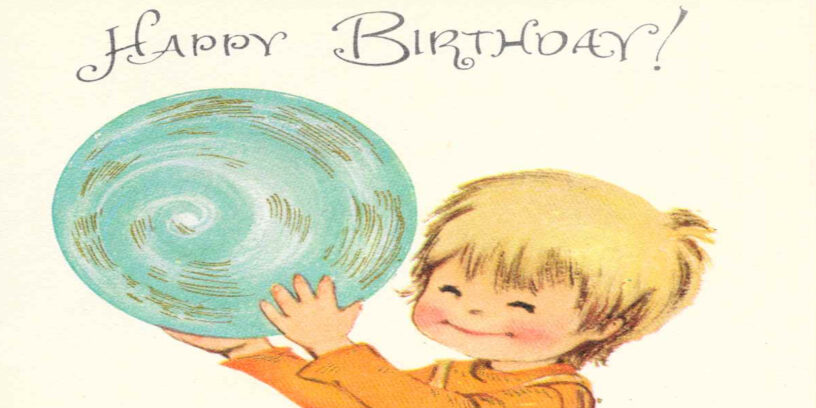 My oldest daughter, Thomasina, turned twenty-one recently, on a birthday that has always fallen, fittingly enough, right in between Mother’s Day and Father’s Day.

Becoming a parent rearranges the rhythms of your days (and nights), shuffles your priorities, teaches you vital lessons that you may not have realized you needed to learn, and introduces you to an abundance of new challenges and joys.

Over the years, I have shared stories about Thomasina and her sister, Zoë (who I have called “Big Sis T” and “Little Sis Z”), and some of those challenges and joys, in my weekly emails and on my Running the Campus blog.

But there is one tale I have not yet shared in writing, and this year, the year of her twenty-first birthday, bookended by a celebration of mothers and of fathers, seems like the right time to share how I met my first relative—and then many more.

Thomasina was due to arrive on May 28, 2000, but if you know her then you know that she likes to take her time and usually runs late.

And so it was that, two weeks past her due date, her mother and I were out walking around the neighborhood when she turned to me and said, “Just think, any day now you are going to meet your first relative.”

A chill ran down my spine.

I was born in Worcester, Massachusetts to young parents who knew they were not ready to care for me, and made the difficult decision to let me go.

After living with a foster family, I was adopted when I was two years old.

I grew up with a wonderful, loving mother, father, and sister.  Dad was a marine and we moved around a lot when I was young, so I did not get to know many grandparents, aunts, uncles, and cousins; but the four of us were, and are, family.

Growing up, I always knew I was adopted.  My mother and father explained that to me when I was quite young, and as far as I can remember, while I certainly wondered from time to time who my birth parents may have been, I never felt out of place or all that different from other kids.

They always told me that if I ever wanted to search for my birth parents, they would support me, though for all of my young life, I never chose to do so.

And so, it was true that I had never met an actual biological relative until Thomasina was born, two weeks later than expected, on June 11, 2000.

The youngest, smallest human beings, like my newborn daughter, are aware, as I must have been, of the other beings around them, especially the ones who hold them, feed them, and care for them day after day.

They relate to those other human beings and form bonds with them.

They notice when they are gone.

By the time Thomasina was a few months old, I was completely smitten.

For the first time in my life, at age thirty-two, as a new father, and as an adult adoptee, I was also beginning to understand the special bond that exists between parents and their children, no matter how much time or distance may separate them, and I needed to know more about where I came from.

I had a few clues to get me started.

My foster mother kept a journal about me, along with a few photographs and a first birthday card that all went along with me when I was adopted.  The card was addressed “To Adam” (my middle name, which my foster family used as my first name), and it was simply signed, “Happy Birthday from your foster brother and sisters.”

No names.  Everything about adoptions back then was strictly confidential.

From her journal, I learned that I had five foster siblings, without knowing whether they were my siblings or not.

I also learned that when I started walking, I always wanted to be outside, especially in the woods. Some things haven’t changed a bit.

And I learned the name of the adoption agency that conveyed me from my birth parents to my foster parents, and eventually to my adoptive parents: the Worcester Children’s Friend Society.

Without knowing what to expect, though imagining more than a few possible scenarios, I nervously wrote and sent a letter to Children’s Friend, asking whether, and how, I might locate my birth parents.

A few weeks later, I received a phone call in response to my letter.  A kind counselor explained that, yes, they would be willing to help with the search, though if they found anyone, it would be up to them whether to accept contact with me or not.

She told me about some forms that would need to be completed, and suggested that it might help if I wrote a short letter to whoever they might find, assuring them that I “meant no harm.”

Although such a thing had never occurred to me, the kind counselor explained that it is not unusual for adoptees to feel anger toward birth parents, sometimes rooted in a sense of abandonment, loss, an incomplete identity, and other complicated emotions that may come along with the adoption experience.

As far as I could tell, I harbored none of those, so I completed the forms and wrote a short, simple letter, explaining a little bit about myself, how the birth of my first child was an awakening for me, and, whether they chose to accept contact with me or not, thanking them for the difficult decision they made so many years before.

And just before Christmas in 2000, I received another phone call from the kind counselor; this time, letting me know they had located my birth father through his college alumni office.

Although they were not married, he knew where my birth mother was and connected the counselor to her.

And, she told me, you have a brother.

I did not yet know their names or anything else about them, only that they existed—but that was so far, far more than I had known the day before.

The counselor explained that, for the next thirty days, we would all be free to write to one another through Children’s Friend, without sharing our identities, giving us all time to gently get to know each another before committing to meeting in person.

And so, through the holiday season of 2000, I had a new daughter, and a couple of new pen pals.

We wrote back and forth during December and January, each careful to follow the rules we had been given and keep our identities confidential, while still sharing at least a few highlights of our lives since we had last seen each other, so very briefly, decades before.

In my second letter, I sent a photograph, a picture of me holding my six-month old daughter, their granddaughter, and invited each of them to send a picture in return.

A couple of weeks later (it took time for these letters to arrive at Children’s Friend and get forwarded, anonymously, to their recipients), after a terrible winter storm had blown through mid-Michigan, leaving piles of snow and ice on trees and rooftops, I was outside taking down Christmas decorations when the mailman drove up, opened the mailbox, and dropped off a handful of letters, including a large manila envelope.

Another chill ran down my spine.

I knew immediately that the envelope was from Children’s Friend; and that it contained letters from my birth mother and birth father, along with their pictures.

The walk from the front of my house to the mailbox could not have been longer than twenty yards, but it felt like miles.

I was filled with a combination of eagerness and anxiousness; part of me wanting to dash through the snow, fling open the mailbox door, and quickly tear into my origins at last, and part of me hoping that walk to the street would last forever.

A sudden gust of cold, whipping wind helped me decide.

I opened the mailbox, saw the by-now-familiar Worcester Children’s Friend Society logo on the envelope, felt by its size and weight that it did, indeed, contain not only letters but the promised pictures as well, scooped up the pile of mail and walked back to the house.

Once inside, I sat down and looked at the envelope—for a long time.

I knew that once I opened it, there was no going back.  I was about to see, for the first time in my life, what my birth parents looked like, and knew that the day was not far away when I would be able to actually meet them and, hopefully, my brother, too.

Finally, I summoned the courage to carefully unseal the envelope, reach inside, and pull out its contents.

As much as I wanted to read the letters on top, it was what lay beneath them that interested me the most in that moment.

I set the letters aside, and the first image to greet me was my mother, Lisa’s, enlarged New Hampshire driver’s license picture.

I could not help but notice similarities between us.  A long, slender nose.  Slightly crooked teeth.  And although she was several years younger, she bore more than a passing resemblance to my adoptive mother, Judy, who raised me, which was comforting.

And then, my birth father’s photograph, a headshot taken, I later learned, in front of the door to his engineering company’s office in the little town of Mount Readfield, Maine.

Blue eyes, curly hair, a plaid shirt.  I didn’t know it yet, but a few weeks later, I would be celebrating my first St. Patrick’s Day as an Irishman.

By the end of January 2001, Children’s Friend shared phone numbers and last names (Carlson and Riley) and we were finally able to reach out and talk to each other, spending hours, perhaps tentatively at first, then with great enthusiasm, reuniting.

I learned that not only did I have a full brother, also named Adam (a story for another time); but a half-brother and half-sister as well, each twenty years younger than me.

Since then, we have all grown closer together, along with an eclectic collection of cousins, aunts, uncles, step-siblings and more; vacationing and going on adventures (my brothers in particular have been frequent hiking, camping, and skiing buddies), enjoying birthdays and holidays, and sharing in new arrivals, passings, and all the milestones of family lives well lived.

And so today I am happy and thankful as I celebrate Father’s Day, a few weeks after Mother’s Day and the birthday of my daughter whose arrival twenty-one years ago made me a father and (for the third time), a son, and made all of this tremendous joy possible.